The One with the Recipes

As summer is winding down, I find myself once again perusing through my cookbooks for new recipes, as well as enjoying old favourites. And nothing is as tasty as... 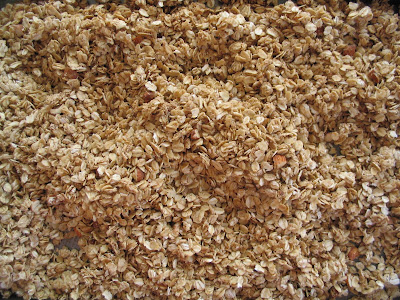 Homemade granola!
There are lots of recipes out there but here is what I do:
Mix together
4 cups of rolled oats (not the quick oats)
some cinnamon and
shredded coconut and
almonds that I have cut up. You can add any nuts you like though.
In my measuring cup, I stir together
1/3 cup oil
1/3 cup maple syrup
1 tsp vanilla extract
Add to oat mixture and stir together well.
Cook at 300 F for 30 minutes, giving it a stir every so often. Let cool then put in a container. You can add some dried fruit or raisins if you like. I always mean to double my recipe because it can easily be gone in a day or two!

Next is a new recipe I recently tried: 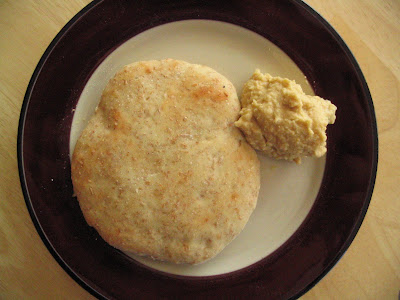 That, my friends, is a homemade pita. I am very proud of it because although it is not pretty, it is very, very tasty! The hummus I'm not so proud of as it is only so-so. Still a work in progress I guess, so I'll just share my pita recipe. You need:

Combine yeast, sugar and water and stir until well dissolved. Add the flour and salt, followed by the olive oil and then the remaining lukewarm water. Mix well. You can add water or flour as necessary to make a moist but firm dough.

Knead it until smooth and elastic - about 5 - 10 minutes. Then divide the dough into 10 equal portions. Flatten it out with your hand, then roll into about a 6 mm thick circle. Place on baking sheet, cover with a slightly damp kitchen towel and put aside in a warm location until doubled in bulk.

That's it! I was a little bit surprised that they were actually cooked in this short amount of time but they were. You can brush them with olive oil if you like, and serve them warm.

This next recipe is a soup that my whole family enjoyed (and I liked that it was very quick and easy!) It really is soup, but the macaroni absorbed a lot of the liquid so it looks like more of a stew. 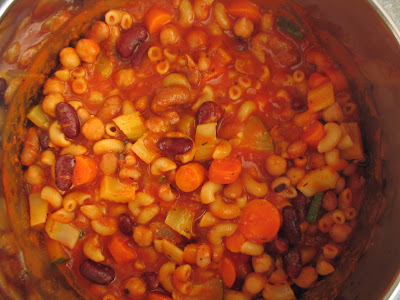 Here is the really simple recipe:
First, saute in olive oil
garlic
celery
carrots
dried basil, oregano, and thyme. (the recipe called for onions but I didn't have any so I left it out - much to the joy of my husband and son)
After about 2 minutes, add some chopped zucchini.
Pour in some tomato juice - I used a 750 mL bottle and boil. After it boils, add 1 cup uncooked macaroni. Stir often as they will want to stick! Once they are cooked, stir in some beans. I used a bean blend with chickpeas for my chickpea loving son. Once it's warm, it's ready! If it is too thick for your liking, you can add some water.

I've also been experimenting with some recipes from the Vegan Lunch Box cook book. I'm not going to give out her recipes though, as she is a stay at home, home schooling mom and I'd like people to support her and buy her book. The first recipe I tried was her potato salad. I have to admit, my picture does not do this recipe justice. It's really good. 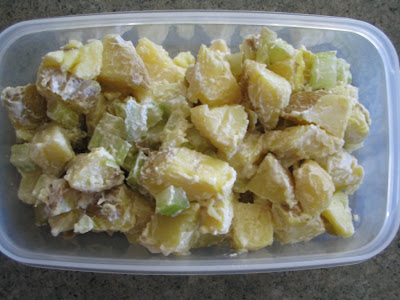 Over the years, I have been frightened off from potato salad by the large chunks of (nasty smelling) hard-boiled eggs. Even my non-vegan husband liked this recipe but he said he did miss the pickles (although that could easily be added)

I've also made her Sneaky Momma's Black Bean Soup which was also really good. I don't have a picture but it basically looked like pureed black beans with some beans added in after. The sneaky part is that it was hiding zucchini, red pepper and tomato. It was a pretty thick soup, but instead of adding water, we served it on brown rice. Yum, yum!!
Posted by Samantha at 11:49

I can't wait to visit again and be treated to such delectable delights!

Yum, yum, and yum, they all look good. So I guess if you know how to make Sneaky momma soup then you qualify as a sneaky momma, I have a recipe for sneaky dad's pudding too if you or perhaps R want to try that on L. The ingredient you are hiding is avacado in this case. :-)

The pita bread was delicious and went way too fast as did the potato salad. Hmm, recipes that hide things, what a concept. Have you found the one that hides mushrooms yet? ;0) lol

It all looks sooo tempting, Samantha!
Hmmm. I thought you were against hiding ingredients in food, right? Oh, okay you don't like mushrooms being hidden in anything you plan to eat, but it's acceptable to hide zucchini and red peppers? You are a sneaky momma...