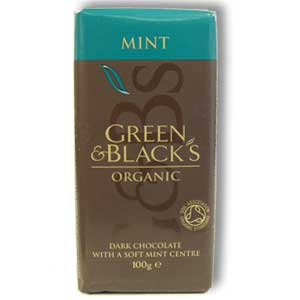 You know how sometimes when you have a nice, big new chocolate bar - let's say a Green & Black's dark chocolate mint, just for example- and you know that you should savor it, just eat a piece or two a day, but before you know it you've gone and gobbled it all up? No? Maybe that's just me then.....

Um, anyway, that is very much like what has happened with the Horrible Histories CDs, they're just too good to be savored. Obviously my boys have inherited my tendency to want to enjoy the "good stuff" now rather than savor later .

We spent almost all of yesterday listening to them while the boys drew pictures( E drew a Trojan horse that he is quite pleased with) and sorted Lego and I started knitting a new pair of socks. S listened to one when he got home and also enjoyed it. 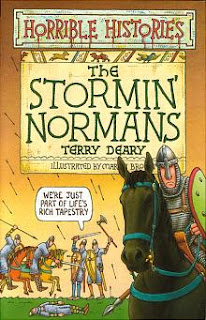 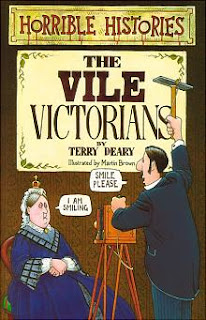 Imagine history lessons in the manner of Monty Python and you've got a good idea of how funny these are. My favourite was Terrible Tudors(which happens to be the section we are on in SOTW ) , W's favourite was The Savage Stone Age and E's was the Groovy Greeks. The author, Terry Deary, is in the CDs and he is hilarious - he must be a John Cleese fan. These CDs are great, think along the lines of Monty Python and the Holy Grail 's Black Knight scene ( remove any foul language) and there you have it....a fantastic way to interest people of all ages in all the details of history, and oh, so funny.
Posted by Heather at 11:25

Hi- hope you dont mind me popping in here again- I wanted to know eher you found these history cd's? They look right up my daughter's alley. You can pop in and let me know at www.-out-side-the-lines.blogspot.com. My profile isnt enabled, so have to leave my link. thanks!

Thanks for the info Heather. Also for the heads up- probably okay for my daughter(she is obsessed with The Princess Bride, Redwall and any type of fencing/sword play books!) but my son is too young. I appreciate it!