I don't listen to the radio too often, I tend to like the kind of music that they don't play on the radio anymore (at least not on any of the stations around here), plus I can't stand the commercials. Today I was working in the garage and decided to listen to the oldies station thinking that on Sunday they normally play a lot of fifties music and I was sure that I would get to listen to some Elvis tunes. Imagine my surprise and (temporary) delight when they played song after song from bands I had seen in concert when I was a teen. I heard Bryan Adams, Rod Stewart, The Beach Boys, Trooper and Helix. If they'd played Billy Joel, Loverboy, Van Halen, Rick Springfield and a few other bands they would have pretty much covered most of my concert going days.

As I was singing along - and wielding my paintbrush in time to the music- it occurred to me that this was the oldies station - just to be clear, let me repeat that - the oldies station. The songs from my teenage years are now considered "oldies"? How can this be? One minute I was in school -happily going to concerts with music being an important part of my teenage life- then came college, a few years in Alberta, falling in love and getting engaged, a job transfer and bringing this man back to B.C with me (someone had to knock some sense into him), then marriage, another transfer (happily he came along again), buying a home, a child a few years later, another home, another child and ....wham...now I am an oldie. I can accept that some of the music that I grew up with could be considered oldies: Queen, The Stones, Burton Cummings, The Beach Boys, The Eagles. I guess I could see how some might think of those as oldies, but how on earth is Bryan Adams considered an oldie. When I think of oldies I think Elvis, The Temptations, Roy Orbison, Bill Haley, Buddy Holly, The Everly Brothers, Willie and Waylon, Johnny Cash, you know?

Anyway I took my old radio out into the garden and spent the rest of the afternoon singing along and thinking about how strong music is, in that it can bring back memories you had all but forgotten. My Girl by Chilliwack came on and I remembered singing this in an in-concert (I don't know why, I just know we did), Crazy Little Thing Called Love by Queen reminded me that when I was ready to quit my piano lessons my mom made a deal with me that I could play whatever I wanted (she would arrange it with my teacher) if I just kept going and so she bought me a book of popular music that included some Queen. Do you remember American Pie? I remember belting this out with a group of girls at a birthday party in elementary school. What about Janis Joplin's Take Another Little Piece of My Heart, anything by Super Tramp, Bay City Rollers, Bee Gees (yes, I love them) and Abba? Or maybe Pink Floyd's Another Brick in the Wall; we all loved the bit about "we don't need no education" , didn't that just seem so cool to you at a time when your life did seem controlled by teachers? I remember coming home from riding lessons singing along to Rhinestone Cowboy and that it was my favourite song when I was about 6 years old. I recall loving B.J Thomas' Raindrops Keep Falling on my Head, Hooked on a Feeling, and (Hey Won't You Play) Another Somebody Done Somebody Wrong Song and Burton Cumming's Break It to Them Gently. I still love to sing along to Me and Bobby McGee, most of John Denver's music or any Gordon Lightfoot songs.

I enjoyed listening to these songs so much then... and I still do now and it certainly made all my work in the garden just seem so much easier. It has reminded my how important music still is in my life and I will make a point of turning on some music more often. My folks had (still have) a jukebox and so I grew up with a lot of fun, old music in the house and I want this same appreciation of all kinds of music for my boys. And the paint brush that I was using when I started listening to the radio.... 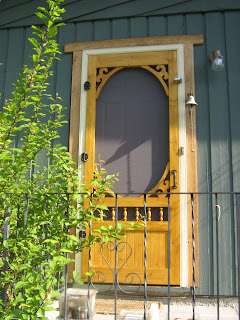 resulted in this screen door being finished.
Posted by Heather at 08:38

I love that "old" stuff too. Coming from Britain, I am often surprised by an 80s song by a British band being played here, and it's just like being in a time warp. I usually only listen to the radio when I'm driving, and as soon as a familiar song comes on, I'm singing along....it annoys the kids, but I don't care!

To me, the "oldies" are still the tunes my parents listened to... now I find myself in their position from my teen's point of view. Kinda funny, really. Weird how that happened. Like you, I still sing along with the music I heard growing up and my boys don't see how I can like what I do. I guess that it's for the memories it triggers. It doesn't seem that long ago that I was a teenager and at least when I hear the music from that age I can be a teenager again - if only in my mind ;o)

Since it makes me happy, I'll just keep on singin'!

I'm sorry but whenever I picture Elvis, I picture satin jumpsuits, sequins, big side burns ;o)

Are you saying that is a bad thing? You don't like big burns and white jumpsuits? Should I tell Katherine that she better quit sewing the one she was making for R? ;-)
Maybe next time we have girls' night we should watch the '68 comeback special of Elvis - how do you feel about clean shaven and black leather? Hmmm?

Hey, let's not convert Samantha to Elvis, Heather. Count me in for watching the '68 Elvis comeback special. Reminds me that I never did show you the Elvis collector mag I bought as a kid after he died. I thought I would marry Elvis when I grew up (I didn't know the man's age until he died - I thought he was still a really young guy 'cause I only saw him in Sat. afternoon movies on TV - like in Blue Hawaii... I didn't see pictures of him in the sideburns and sequined jumpsuits until after he was dead. No, I'm not a fan of that look and wouldn't have been keen to marry him had I seen him like that ;o)

Elvis comeback special? Is that in black and white?

I'm afraid I'm going to have to pass on the Elvis jumpsuit for R. Just can't get into him or his music. Did you know would be older then my grandparents?

Is there an "ancients" radio station because I do believe he is too old for the oldies station? hee hee

O.K, it is one thing for you to slam Alan but slamming Elvis??? Isn't that illegal? It should be.

hee hee - you guys are too funny! i also love listening to old music and love the memories that come with it. every once in awhile i stick an old "mix tape" into a cassette player (in the car)and let it transport me back to my teen years. for me my teens years where more depeche mode, erasure,and new order as well as the country music my folks listened to on road trips. elvis and johnny where old friends!
xojacq