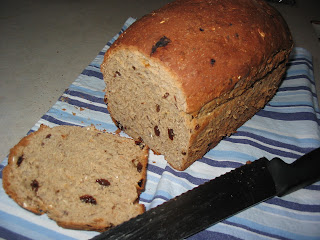 This is some multi-grain raisin bread that I had been longing to make -it's very high on the "delish scale" - but I wouldn't make it until my kitchen machine with the dough hook was repaired. Okay, I could've make it without the dough hook, but by promising my man that I would bake him this bread if he would fix my machine was the right motivator. Happily my hubby removed the broken part for me (did you know that you could actually wear out a dough hook so that it shears off while leaving the stump in the machine's receptor?) So, repairs completed, this lovely bread was the first thing I made. I actually baked two loaves, but the first loaf didn't even get to cool much before it was greedily devoured (even my son who *hates* raisins had 2 slices - it's that good). Fortunately, this bread is filling, which meant that I was able to photograph the other loaf to show you before it too was devoured. 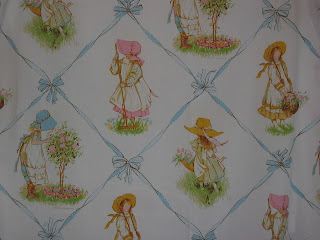 Anyone recognize this print???? This is part of a sheet set that I found at the thrift store on Sat. I couldn't believe my eyes! Holly Hobbie sheets in mint condition. I loved HH as a girl - I still have my HH rag doll that I got for Christmas when I was 7 or so. I also had a HH lunch kit when I was in grade 1 and I still have my HH easy bake oven. My mom even sewed my sisters and I HH costumes for a parade we were in as girls. Anyways, my fond memories of this character had me scooping up the sheet set even though I have 2 sons and no daughters - I just couldn't resist buying these sheets. So much yardage for so little $. I wish they were 100% cotton, but alas, like most fabrics from the 70's, they have polyester in them. I haven't decided what I will make from them - for once I am hesistating in cutting something up... ( are you surprised to hear me say that, Heather?) That doesn't mean I am short on ideas of what to make with them, but for now I'm enjoying the look of them and the fond memories they evoke.

No idea who Holly Hobbie is though. I imagine I will have to leave town to do my thrifting from now on - I doubt there is anything left in town! ;o)

I am surprised to hear you say that, I think of you as heartless with the scissors and thrifted finds. Would that I could be the same way and then I wouldn't have such a stash. ;-) Diane will be loving that find of yours, she is a HH fan too. Samantha, I think Strawberry Shortcake might have been more your time? I just found a HH wallhanging that my mom had made for me. I will show you guys on Thursday...if you remind me.

Guess I know what to bake for you then, Samantha.
I used to trade my dessert from my lunches for another girl's homemade raisin bread at elementary school.

Heather - Yes, I want to see the HH wallhanging your Mom made for you.

Yep, i know Strawberry Shortcake (the cute little girl with a strawberry smell) Remind me to tell you a story re SS Thursday.