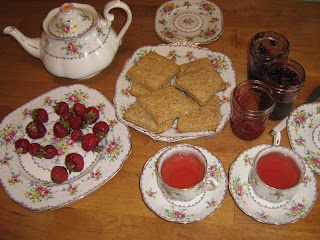 We like tea parties around here. It used to be that there was never much room for me at the table because all the seats that weren't filled with boys would be filled with stuffed animal friends. These days it is just the three of us- although if E had thought of it he likely would have brought along a teddy. The tea set is a petit point one that was passed on from a great aunt to my grandma to me through my mom. So with my grandma's Scottish oatcake recipe ( a little bit updated), this tea set, our homemade jams and some really bad British accents we had a lovely tea for an early lunch. Do I love that my eleven and seven year old boys still like a good tea party? Too right I do.

Whenever I think about my grandma the first thing that usually comes to mind is a little rhyme she used to tell me in a very pronounced Scottish accent.
Rooond about, rooond about (means round )
goes the wee mooose ( that really means mouse -said as she traced her finger round the palm of my hand)
Up a bit, up a bit
In the wee hooose (means house - as her fingers tiptoed up my arm to tickle my oxter - oxter was her word for armpit) 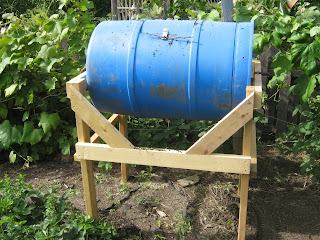 One more thing, how great is my hubby? I mentioned that I would really like one of these, so he went and found almost all the bits and pieces so that he could build me one out of re-used stuff. I love it! (and him)
Posted by Heather at 12:19

My version of that is...round and round the garden, like a teddy bear, one step, two step, tickle him under there... with the circles in the palm, then stepping up to end up with a tickle in the armpit! My boys used to love it.

Lucky girl!! Love that rolling composter! I should show this to my dear husband as well...

Any chance of sharing your oatcake recipe?

Heather, I have that same tea set! Actually, it's my "china" - inherited from my grandmother and an "adopted" aunt. Jr. just asked today if we could have a tea party and I thought of all this beautiful china I have sitting in my cupboard and I said, yes! But maybe on the weekend - we've got lots of outisde opportunities tomorrow and then I'm working three days solid.