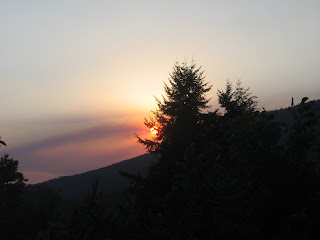 Lisa, I don't know who you are but you are brilliant when it comes to zucchini recipes. After checking out the garden yesterday I decided I would go ahead and make the zucchini casserole recipe that you left in the comments and it was delicious. 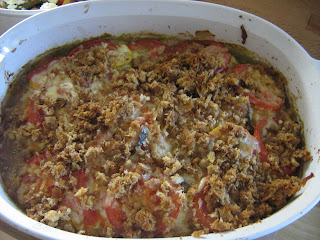 Soooo good. I had three big helpings of it, nice and easy to make too. Thank you so much for sharing the recipe. 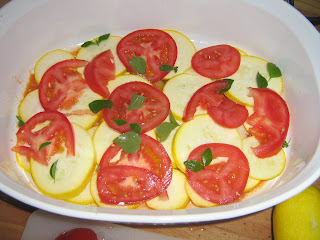 Here is the zucchini casserole in progress. 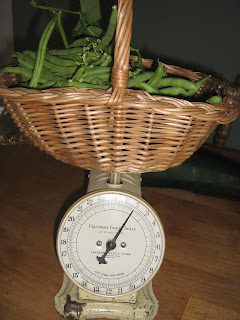 I also found about two pounds of beans that needed to be picked and decided to make a sort of Greek bean casserole with those since I would have the oven on anyway. 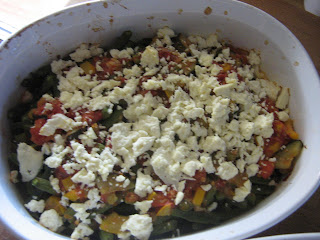 It turned out to be great as well. 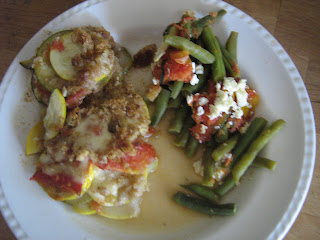 There was also a lot of basil that needed to be picked before we go so it was time to make another batch of pesto. This batch was all frozen for winter use. I just put a few spoonfuls into little plastic containers and then pop them out when they are frozen. I put them into freezer bags and they are very handy and easy to use. 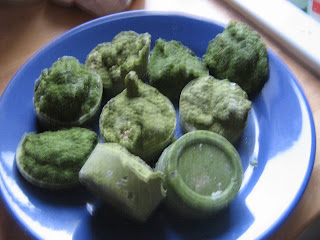 The plums on our tree are proving irresistible to the wasps. E got stung on Monday when he was out playing in the back by the plum tree. He was stung right on the end of his finger. On Wednesday night he was stung on the bridge of his nose right beside his left eye, much of yesterday was spent with a cold pack on his face while we cuddled. Yesterday early afternoon he went to take a bucket of plums to a neighbour and I heard a blood-curdling scream of frustration as he was stung again. It was all just too much for him and he wanted to spend the rest of the day inside. As we were soaking his arm in cool water he said to me that he thinks they must sting him so much because he is so sweet. I smiled at him and he continued that he was so sweet because he eats so much fruit and good stuff. How can you sting such a little sweetheart?? Nasty wasps! When S arrived home from work last night E's side of his face was swollen and his eye was shut. S went to the pharmacist to get him some Benadryl. There are times (though few) when we will resort to using medicine and this was one of them. The sting was so close to his eye that I couldn't really put anything on it, his other stings I put a sliced onion half on right away and they did healed up right away. 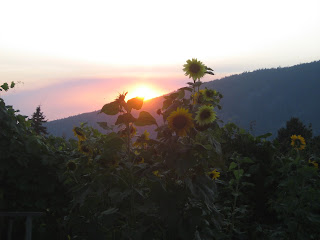 I decided that I would pick the rest of the plums so that the wasps would get lost and while I was picking the sun was setting over my garden. Pretty, heh? (and there are still some left on the tree Nicola if you want some - I didn't want to pick in the dark in case I grabbed one with a wasp on it)
Posted by Heather at 07:13

I might just have to help myself to more of those plums. Even K likes them and he's the PICKY one!
The sun looked orange last night - forest fire smoke in the sky from somewhere, though I haven't been reading the news to find out where.
Poor E - I guess the wasps just think he's too much competition when it comes to the fruit!

Poor E! Talk about making you wary of the plum tree.
Once again, you're tempting us with your food photos, Heather. I have one question for you, though. How do you manage to get the photos? I mean you've got hungry boys too, and in my household it seems I'm just not fast enough or something to get a good photo before the food is gobbled up. So what's the secret to getting a photo BEFORE there's nothing but leftovers????

Hi again, I also used to make a cake from a recipe from Taste of Home magazine. It was also delicious. If you contact me I can scan it and send it to you. Lisa
lldegenatverizondotnet