A grand day out

First, I have to thank Heather for giving me the idea of putting sliced fresh peaches on top of oatmeal (or, as it's called in our house, porridge). I have had it for breakfast two mornings in a row - I added cinnamon and raisins and a sprinkling of turbinado sugar too. 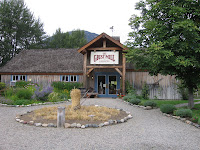 Today, my family went to the Keremeos Grist Mill. It is a restored flour mill, originally built on the site about 140 years ago. We learned a lot about the history of the area, the people who started the business, how they built the log buildings and the tools they used.


When the mill ceased to be used as such, it was left empty for some time. Later it was used as a hay loft and an artist's studio. When it was decided to restore it as a historical building, all of the pieces of machinery that had been tossed in the lower room had to be put back together by guesswork. 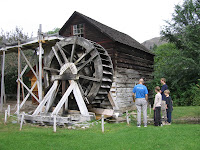 This mill wheel was constructed to be as similar to the original as possible. The flume in the top left of the photo is bringing water from the creek. A simple wooden lever inside the building diverts the water either downwards into the runoff channel or over the top of the wheel to start the machinery.


Here, S is trying his best to pump water with the old-fashioned hand pump. K, being bigger, 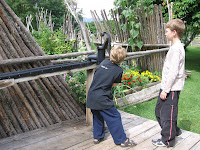 had more success. Inside the Exhibit building, there were many samples of wheat and it's different components. There was an excellent demonstration of the two main methods of getting the grain around the mill - an auger which makes it travel horizontally and a bucket system (small metal scoops attached at intervals to a textile strap, which would originally have been made of buffalo hide). We were able to turn the handles and work the model.

Our tour guide filtered the ground wheat through two filters to show us how three products can be produced - the really rough stuff (which was fed to animals), "brown" flour and "white" flour. I was pleased that he explained that most of the nutrition had been removed from white flour and that it was ironic that the wealthy people, who preferred their baked goods to be light and white, were doing themselves a disservice, while the poorer people who ate their flour less refined were getting way more nutrition. He told us that white flour, when left to mature for three months, naturally lightens. However, modern producers can't wait so use chemicals to bleach the flour and then, as they have totally stripped all goodness out of it, put back some vitamins artifically. When he asked if there were any questions, I laughingly said, "Yes, why do people buy white flour?" Really, you might as well eat cardboard! 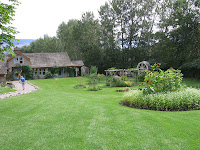 The mill is surrounded by beautiful gardens in which are planted flowers and heirloom fruits and vegetables. There is also a tearoom where we drank tea, coffee and home-made lemonade. I think the mill is a family-run business because there were two children serving people. (By the way, the washrooms were very clean and fragrant - always a good sign in my book!)


In one visit to this mill, the children were learning history, social studies, physics, biology.....all things which we will be able to report to our Learning Consultant at Self Design next week. 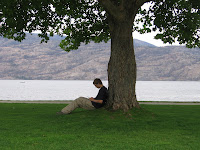 L bought himself a DS Lite (which to the uninformed, is a handheld game system) this weekend, so he had his head down and his thumb stuck to it for a large part of the drive, but thankfully he kept it in his pocket while we were at the mill.

I took this photo of him when we stopped to stretch our legs on the way home.


And finally, a self-portrait (cropped to show just the important bit)! I took this knitting project out with me today so I could knit while R drove. 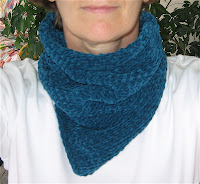 This is some Lion Suede that L had from his very short-lived attempt at knitting a scarf. He only did a few rows and it's been sitting in a bag for about two years. I like the teal colour and will keep this for me as I think it suits me.

This is a neckwarmer of very unusual construction. I cast on 15 stitches and knitted straight until I was getting near the end of the skein. Then I started decreasing one stitch at the left edge every four rows until there were only 3 stitches left. After binding off, I sewed it into a spiral. Because of the decreasing, the top edge is fairly level, but as you can see the cast on edge sticks out at the bottom making an interesting V- shape, like a bandanna - it makes me think I could pull it up over my nose and rob a bank! Just need to knit myself a Smith & Wesson now.
Posted by Nicola at 21:04

What a beautiful place.

Rob a bank??? I can't see you doing that. (a yarn store - maybe, a bank - no) If I had made that it would have been taken by my boys, yesterday they were out with the neighbour and they all had kerchiefs and costumes on.

Great photos! I've always wondered about the place and now feel as if I've been there.
Love your neck warmer. That chenille yarn is one of my favourites.