Having a deadline really works! 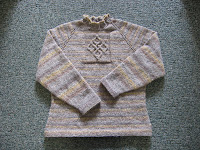 I set myself a deadline of the end of December to finish the top-down raglan sweater. It worked! I finished it yesterday and I love it!

I started knitting it back in October, after we returned home from Quadra Island. I know that because I bought the yarn at Fun Knits on Quadra.

It was a bit of an adventure, as I hadn't knitted a sweater from the top down before and I was somewhat nervous about doing all that knitting and possibly having to rip it all out. As I was following general guidelines from a book rather than a specific pattern, I had to make several decisions as the work progressed. 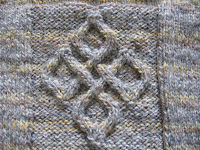 One of the decisions was to include this Celtic knot pattern from the book Viking Knitting on the front. I liked seeing the pattern emerge as the rounds went by.

On my way down the body, I incorporated some gentle decreasing and increasing for some waist shaping. 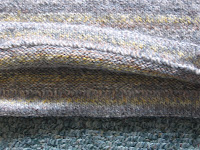 I decided to keep the hems plain - no ribbing on this sweater. The bottom edge and the cuff edges are finished with a round of purl stitches followed by an inch of knitting with a smaller needle, which is then turned up and sewn down without casting off. It makes a very neat and stretchy edge. 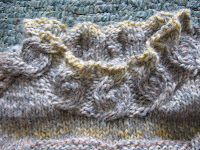 The final part was the neckband. I picked out a pattern from one of my Harmony stitch pattern books called 5 stitch cable with bobbles. Once I had picked up all the stitches around the neck, most of which were on waste yarn from my provisional cast on, I had 79 stitches, so I just had to sneak in one increase to make a total of 80. Then I was able to fit in ten of these cables around the neck with 3 stitches between each. The bobbles don't "pop" quite as much as I'd like, but that's OK.

All I have on the needles now is the second fingerless mitt to match the one I posted about the other day. After that, I'll just have to make another trip to the yarn store!

By the way, I hope you like the new features in the sidebar. I have listed and linked to the knitting patterns which I have posted in the last year, and also the recipes which the four of us have included in our posts.
Posted by Nicola at 13:55

So very pretty, Nicola. I love the Viking motif you chose and the lovely edge for the neckband. You're my knitting idol. ;o)
Oh, poor you. Knitted up all your yarn and will have to drag yourself to the yarn store to replenish your fibre supplies... how dreadful. ...grin...