Or maybe I'm not meant to wear a beret. I finished the 'kicky' beret in record time (for me that is) and have been attempting to make it look beret-ish on my head with no luck. Now, the pattern does say you can block it (ha ha! blocking? what's that? sounds like gauge, a myth that they write about in books, ha ha ha!) so that might have helped but instead I have been choosing to pull it down to cover about as much of my head as it possibly can.

I tried to take some photos 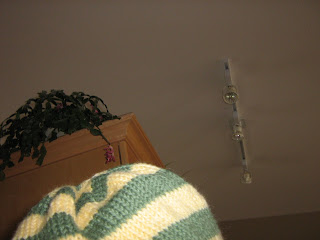 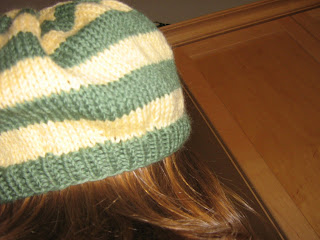 but it's really hard to get a picture of the back of your head. My son attempted to get a picture but it was hard for me to get past the messy hair and pjs in the photos.
So here is a photo of a 'kicky' teddy bear wearing the 'kicky' beret. 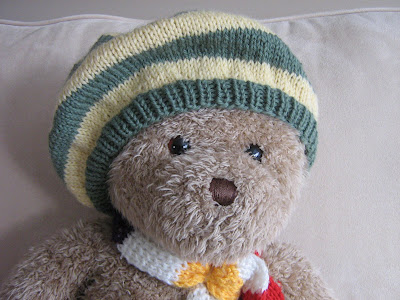 I think he really pulls off this look and that I should start knitting him a matching scarf.

After I finished my hat, I started one for my son. I chose a much more manly 'beanie' pattern for him and have produced yet another hat (love how fast they are to knit up!!) 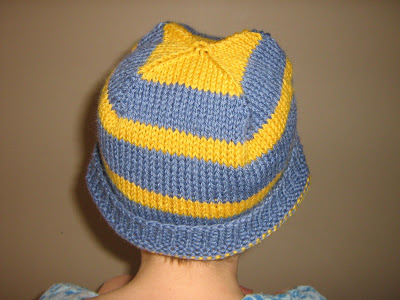 He chose the Ravenclaw-ish colours (I suppose I should mention I got the patterns from Charmed Knits which focuses on patterns created for Harry Potter fans and most of it is knit in their house colours) which I promptly cast on in a size too big (oops!) and knit him a hat he can grow into. He doesn't care, he loves it either way!
Posted by Samantha at 13:00

If that poor little teddy bear could talk, I wonder what it would say!

Run cat run before you get a hat!

I am going to have to sleep with "one eye open when I visit".

Very nice knitting Samantha, you have a gift!

You could wet it and let it dry over a plate - then it would be more beret-ish! You are getting lots of knitting done this winter!

definitely NOT due to lack of kickiness on your part. def. not.
i agree with Nicola, it needs shaping. not that i'd have the first clue how to do that, but the plate sounds like a good idea!
keep us posted!

I love that beret - it's got great colours. And I love to see people wearing hats. I love hats.