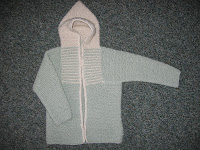 Phew! The Tomten Jacket is done.....except for a fastening on the front.

I decided to put my Sunrise Circle Jacket aside and get this finished. It only needed a sleeve. I found a window of opportunity yesterday afternoon, and then again in the evening at "knitting night" at a friend's house, and then I stayed up until after midnight crocheting along the front edges to neaten things off and disguise the strands on one edge where I carried the two colours up the side.

The Bernat Soy is OK to knit with, but a bit slippery especially on the aluminum needles, and I think I may have to block the jacket in the hope it'll even out my knitting. All this garter stitch did become a little tedious so I don't think I'll be making a second jacket after all.

I have three balls of the same yarn in blue, which I think I'll try knitting up on my Bond for a faster result.

After I finished the knitting on the Tomten last night, 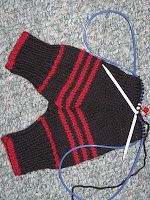 I picked up the hand-holding mitten which has also been
languishing and completed a few more rounds.

STILL another individual mitten to knit.

I shall have to take this project to the arena today - that'll be another hour or so worked on it while the kids are skating and then I'll go back to the Sunrise.

This is lovely, Nicola! The colours are so soft and pretty.