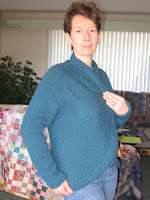 I'm pleased to announce that the Sunrise Circle Jacket is done! Well, except for some buttons, which I haven't bought yet. But the knitting is finished, and it took me the whole of Friday evening to sew it all together, snug in front of a wood fire. I would love to wear this to Vancouver on Monday, but it really should be properly finished first.

A friend of mine is driving us to Vancouver so we (two mums and three kids) can enjoy a sleepover at the Aquarium with a group of about 35 homeschoolers on Wednesday night. We're going on Monday, though, so she can spend some time with her mum, and we're all staying at her mum's house for a couple of nights.

I decided, as knitters do (any excuse for knitting), that a thank you gift for her mum was necessary, so of course a visit to a yarn shop was then essential! I went out early today, before the kids were up, and I arrived so early that it wasn't even open yet. So I just HAD to divert to Michaels, where I picked up some beads and earring hoops and posts (this wasn't an impulse buy, I had been planning to buy these for some time - honest). 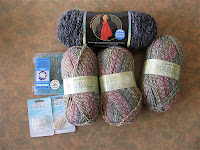 charcoal shades. It will work well for a scarf for my dad. I don't know if he wears scarves, but maybe if he has one this winter, he will wear it, don't you think?

I plan to use something called Cartridge Belt Rib, which is a stitch I used for a scarf for myself a couple of years ago. It's not really rib, it's a combination of knit and slip stitches, but it looks good and doesn't curl. I thought it would make a good airplane project, but do you really think I can resist knitting this before May? No, I don't think so. In fact, it might just get knitted this week as I'll be a passenger in my friend's car for at least 10 hours.

When I finally reached the yarn store, I bought three skeins of the James C Brett Marble DK, which I'm still in love with, in Moss, which is mostly green with some pink and other colours twisted in. I have the rest of today (Saturday) and Sunday to whip up a scarf on the Bond - it'll just be a plain scarf, knitted twice the width so I can sew it into a tube. I envisage having the reverse stockinette stitch side showing, as the colours always look better on the "bumpy" side.

Off to get some belated breakfast now and make sure the kids are getting ready to go the library.

Labels: Knitting, Sewing and other crafts

Who are these homeschoolers and how did you find out about the Aquarium sleepover? Oh, I miss Vancouver, when I hear stories like these...

Wow, great job Nicola! Looks fabulous and it's the perfect time to wear it since it's been sunny, but cool.

If you run out of knitting, you can hit some yarn shops in Vancouver :-)

Sheila, some of them are Learners Unlimited members (our local group) and some are Self Designers. It was organised by one of the LCs who lives here.

The jacket is beautiful, Nicola. I can't wait to see it with the buttons.

Woohoo! Great job on the jacket, Nicola. What a treat to have it done in time for your trip.