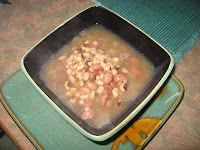 One of the traditional dishes from Jersey, the little island where I grew up, is something called Bean Crock. This is just a bean casserole, cooked slowly overnight in the oven.

Traditionally of course it would have had a ham bone in it, but not in my house!

My mother-in-law still cooks it like that, but after soaking the beans overnight (this time I used pinto, navy and black-eyed peas, though any will do) I blast them for at least an hour in the pressure cooker with a chopped up onion, a couple of bay leaves and a lot of stock. The plan is to have lots of liquid at the end for dipping your bread. Really simple.

I made a batch of bread today (hey, I actually found wholewheat bread flour at the health food store this morning - and I found out why they didn't have any last time - they only order in THREE 2 kg bags of it per WEEK - good grief, I can easily use that in my house alone). Three loaves were plain and the fourth I made into a sort of cinnamon spiral bread. 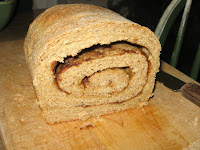 A lazy way of doing cinnamon buns! Actually it could have done with more cinnamon and more sweetener, but it wasn't bad.
Posted by Nicola at 20:16

I am very impressed with your cinnamon spiral bread. x