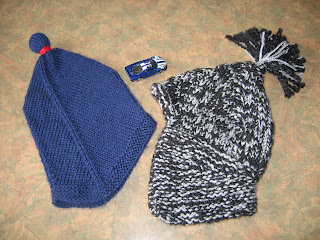 Once my Elizabeth Zimmermann books arrived, I was itching to knit something. I chose the Ganomy (gnome) Hat from Knitter’s Almanac and cast on in the afternoon and knitted until I just had to get up from the couch to make dinner. I continued in the evening and finished it before bed! I didn’t match Elizabeth’s gauge - she tells you to get 4 stitches to the inch, I had 5, but as I wasn’t knitting it for anyone in particular I didn’t mind. I used a ball of dark blue Bernat Satin and US#8/5mm needles.

It’s a cute hat - probably best made for a younger child - I put it on my 8 year old and he called it an elf hat. It was a little tight on him so I shall have to find a small friend to give it to. It comes to a point at the top - Elizabeth suggests putting a ping pong ball in the top and winding yarn around underneath so your hat will float if it falls in water, but I just used a little ball of yarn.

The clever shaping with increases and decreases creates a hat that comes down lower over the ears to keep them warm - typical Elizabeth inventiveness!

Yesterday, somewhat bored with the endless rounds of my sweater, I dug out some black Lion Brand Homespun and grey Bernat Softee Chunky, and used them together to make a Maltese Fisherman’s hat. I used 6mm needles, as those were the largest dpns I had, but it would have been easier on the hands to use 8mm. Again, this hat came out about a 4 - 6 year old size.

This would be a very warm hat (it covers the ears and neck beautifully) and it is tempting to make a bigger one for myself, though I think it might cause a few smirks! ;o)
Here, my goofy kids model the hats! 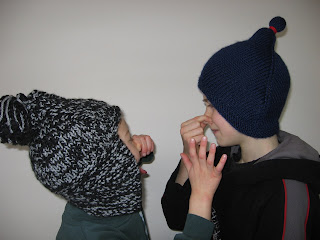