How to tell if you're an idiot...take this simple test.

Now the problem, as I see it, with making something named I-cord (that's short for idiot cord) is this - how big of a loser do you feel like if you mess it up? Let me tell you, you feel kind of like... well, an idiot.

I know you showed me how Samantha, I guess I just had a momentary brain lapse. I was looking at the book and reading their directions while trying to knit the cord, and at the same time thinking about how you had shown me and the two methods were not jiving in my brain, nor in my fingers apparently. The resulting cord was coming out flat, not cord-ish at all. "Oh, dear," thought I, "I can't even make idiot cord, what does that make me?"

Not to worry though, all was well as soon as I stopped trying to follow the book's instructions and just thought about how you had shown me. 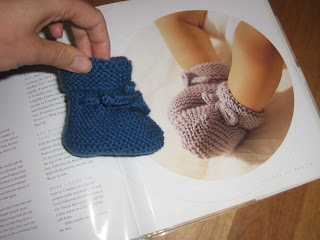 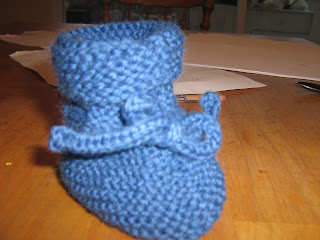 (why is there only one bootie in the pic? read on)

Another fantastic little tidbit that I think you shared with me Samantha was not to weave in your ends until you were done and satisfied with your project. This is brilliant advice, and imagine how bright I would feel if only I had followed it. Although in my defense, I have to say that I had thought I was done, then when the mattress stitch to join my second bootie turned out so much better then the first one I realized that I would have to take the first apart and re-do it. Somehow, while trying to find my (well-woven in )ends, I managed to take apart some of my actual cast-on edge and now the first bootie is a real mess. I have tried to re-do it several times but each time looks worse. I think I will have to bring it to our knitting guru on Wednesday and plead for mercy. Although the booties are wool so if worse comes to worst, I could always felt them - my favorite method for hiding mistakes.
Posted by Heather at 17:43

I think this is one situation where I probably won't be able to help! Considering the small size of the item, I think it would be best to give the messed-up bootie to one of the cats and make another one!!! See you Wednesday...

The one bootee looks good - sorry about the trials with the other one. I recently found myself in a similar knitting difficulty, only mine was with socks. For some reason I struggle with getting the grafting to look like anything but a spasy wool disaster - not the look I intend for the end of my socks!

He is not allowed to leave any comments - I am not as trusting of him as you are of yours. ;-)
One wise-cracker(me)posting on a blog is enough for this family.

Sometimes just having to ask the question reveals the answer you already know...

(this is my she won't let me post comments)