After hearing from Nicola about all of the lint that R found in the back of their dryer when he took it apart, I was thinking that I had better clean ours out too. After all, we have had it for about 14 years and never taken the back off to clean it, I had never thought about it really, as we do clean the lint trap whenever we use the dryer. However I didn't want to take a chance on somehow having a fire start in there.

So yesterday, when S took both boys to the rockclimbing gym I thought I might as well take it apart and have a look. This is, actually, my chosen technique for taking things apart, I wait 'til S is gone and then start tearing things apart, this way if he has any doubts of my being able to get things back together ( which, admittedly is a reasonable concern - he does have previous cause for these feelings) it is too late for him to voice those doubts and dampen my enthusiasm because by the time he gets home it is far too late. He has, on past occasions, even come home to a bathtub and toilet in the driveway. (long story and yes, long-suffering husband)

Anyway, I was rather surprised by the amount of lint I found in the back of the dryer because we don't use the dryer a whole lot and, as I said, we do clean the trap often. The lint was packed in tightly - a compost bucket worth, but thankfully no dehydrated little mice corpses.(another long story, one which had me feeling a little nervous yesterday as I was reaching in and around the inside of the dryer by feel, grabbing clumps of, what I hoped were, lint). Some of the lint that was packed in around a penny had a burned appearance to it, which to me is a cause for concern. At any rate the dryer is cleaned up, put back together and in its proper place and I am richer by 38 dimes and 36 pennies. Not bad payback for a little bit of work. I wonder that the manufacturers don't recommend doing this, or maybe they do and I am just not aware, but I think it is well worth doing every five years or so. 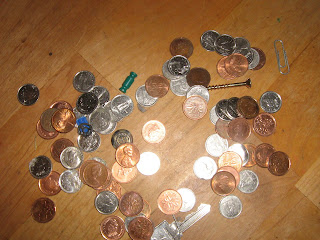 Hey, that's my technique too. I'll never forget the look on my dear husbands face when he came upstairs and I had taken our bed apart (it was like camping for the 5 months it took me to paint it!).
I'd love to hear your bathtub/toilet/driveway story sometimes.