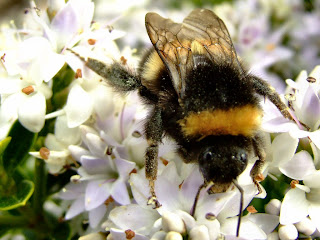 I am quoting Bill Maher here - sounds like something about which we should all be concerned.

"Here's a quote from Albert Einstein: "if the bee disappeared off the surface of the globe, then man would have only four years of life left. No more bees, no more pollination, no more plants, no more animals, no more man."

"Well, guess what? The bees are disappearing. In massive numbers. All around the world. And if you think I'm being alarmist and that, "Oh, they'll figure out some way to pollinate the plants..." No, they've tried. For a lot of what we eat, only bees work. And they're not working. They're gone. It's called Colony Collapse Disorder, when the hive's inhabitants suddenly disappear, and all that's left are a few queens and some immature workers -- like when a party winds down at Elton John's house. Also, if your stinger stays up more than 48 hours, call your doctor.

"But I think we're the ones suffering from Colony Collapse Disorder. Because although nobody really knows for sure what's killing the bees, it's not al-Qaeda, and it's not God doing some of his Old Testament shtick, and it's not Winnie the Pooh. It's us.

"It could be from pesticides, or genetically modified food, or global warming, or the high-fructose corn syrup we started to feed them. Recently it was discovered that bees won't fly near cell phones -- the electromagnetic signals they emit might screw up the bees' navigation system, knocking them out of the sky. So thanks guy in line at Starbucks, you just killed us. It's nature's way of saying, "Can you hear me now?"

"Last week I asked: If it solved global warming, would you give up the TV remote and go back to carting your fat ass over to the television set every time you wanted to change the channel. If that was the case in America, I think Americans would watch one channel forever. If it comes down to the cell phone vs. the bee, will we choose to literally blather ourselves to death? Will we continue to tell ourselves that we don't have to solve environmental problems -- we can just
adapt: build sea walls instead of stopping the ice caps from melting. Don't save the creatures of the earth and oceans, just learn to eat the slime and jellyfish that nothing can kill, like Chinese restaurants are already doing.

"Maybe you don't need to talk on your cell phone all the time. Maybe you don't need a bag when you buy a keychain. Americans throw out 100 billion plastic bags a year, and they all take a thousand years to decompose. Your children's children's children's children will never know you but they'll know you once bought batteries at the 99 cent store because the bag will still be caught in the tree. Except there won't be trees. Sunday is Earth Day. Please educate someone about the birds and the bees, because without bees, humans become the canary in the coal mine, and we make bad canaries because we're already such sheep."

Aaargh, if that is part 1 I don't know if I can bear to hear part 2. Does it get worse?

Love this quote, "If it solved global warming, would you give up the TV remote and go back to carting your fat ass over to the television set every time you wanted to change the channel."

Really, it isn't funny....but it sure does make me laugh the way he says it. I'm guessing the (honest)answer to that one for a lot of people was "no".

I'm with Heather on this... how much scarier is part 2?
sigh... We must wake up to the fact that human actions do come with consequences which impact all areas of nature. I will stop here, before I get into writing a rant on this topic...
Thanks for this post, Nicola.

holy moly. i knew it was bad, but i had no clue what the reality really was. how can we help?