Envious of Knitting Iris's blog posts (see link in the sidebar, way down on the right) in which she frequently groups her photos according to colour, I decided to do my own colour study today. As I have been learning Spanish with my boys, here is AZUL...which of course can be pronounced two ways, athool or assool, depending on whether you're in Spain or Mexico! 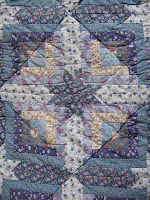 A bed quilt (the only one in my house not made by me), commercially made, and acquired at a garage sale for $5. 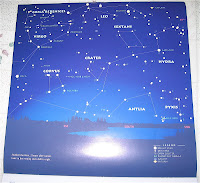 An astronomy calendar on my kitchen wall. 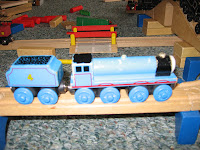 Gordon, the big blue engine, from the Thomas the Tank Engine series. We've had this Brio train set since L was two (13 years ago), and for a few years we kept adding to the set, but now it sits in the box for long periods. However, even though the boys are now 15, 11 and 8, it does still come out occasionally. And I wouldn't want to sell it or give it away because it's such a classic toy and maybe, one day, will be played with by the grandchildren! 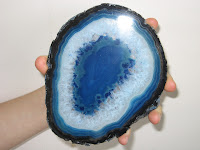 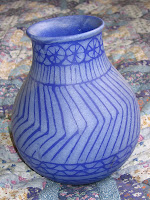 A vase which I love, even though I rarely have fresh flowers in the house. 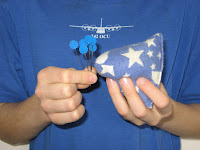 Middle son's contribution to AZUL - the T shirt he was wearing today, some flower-headed pins and a home-made beanbag. 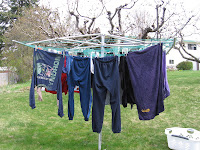 Laundry hanging out to dry. I love it when Spring comes around, as I can start saving lots of money on machine-drying and enjoy hanging out clean laundry in the sunshine. 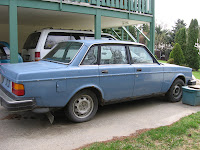 Oldest son's Volvo 240 - for two years, this has been sitting in our driveway. He was desperate to get a car, and despite the rest of the family being very resistant to this idea, I supported him. He's not old enough to drive it yet, though it was running when he bought it for $250, but he could have learned a lot from messing about under the hood. Unfortunately he has let it go, taking off the outer trim and dismantling the inside, and I am now hearing "I told you so" from my husband! 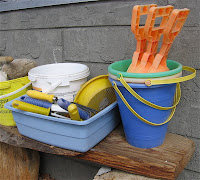 Beach toys and garden tools that have been sitting outside the back door all winter waiting for hot summer days to return.

That was fun - now to decide what colour to feature next!
Posted by Nicola at 15:15

Hi Katherine!
Thanks so much for popping by & visiting!!!
~cheers~
Angie