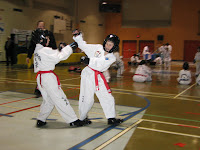 K and I were up bright and early Saturday morning to drive to a Taekwondo tournament. I wasn't competing, but K entered both patterns and sparring competitions. He did very well, coming home with two silver medals. Younger brother S took these photos - unfortunately our digital camera is a little slow - there's a delay between pressing the button and the picture being taken, and another delay while the camera stores the photo and is ready for the next shot. In the above photo, K is on the right in full sparring gear (helmet, hands, feet, shinpads, mouth and groin guards). 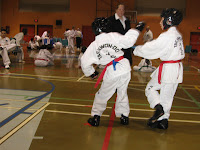 That's him on the left in the above photo. 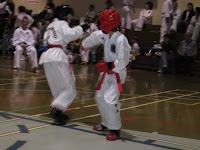 Above and below, he's on the left again, against a different opponent. 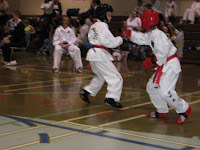 As it was Worldwide Knit in Public Day, I made sure that I pulled out my sock knitting for a while, which drew some admiring attention from the lady sitting on the bleachers in front of me.
Posted by Nicola at 09:34

Congrats K!
As for you, Nicola, well you are the poster girl for Knit in Public Day (which is pretty much everyday of the week with you, isn't it?)