From a jacket to a bag

This was a jacket that R had for Tai Chi. He has some pants to match but he usually only wears a T shirt with the pants when Tai Chi playing and this jacket has been gathering dust in the closet for a long time.
Today he asked me if I could make a bag out of it for carrying his lunch and stuff to work, and while it seemed a shame to cut it up it'll get way more use as a bag! 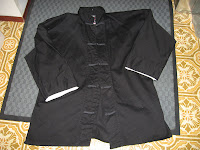 I dragged out the sewing machine, which has recently been relegated to a shelf in my "sewing room". It hasn't been a sewing room for a while, partly because I rarely quilt these days since knitting took over as my primary passion, and partly because my dear son has been filling it with computer stuff. He has been building an "all-singing, all-dancing" PC from new parts, which he has ordered bit by bit as he earned the money. He has also been taking apart old computers and leaving the bits strewn around the room.

So the sewing machine was moved to another room in the basement so that I could set it up and make the bag. The light wasn't great, and I did my cutting on the floor (because my nice large table is full of computer crap) but I think I did OK. I even managed to incorporate the frog fastenings from the front of the jacket into the outside pockets of the bag. 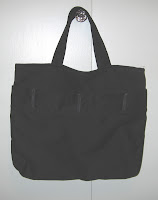 This picture isn't very clear - I tried to lighten it up in iPhoto - but you get the general idea ;o)
Posted by Nicola at 20:06

Labels: Sewing and other crafts

Very stylish, Nicola. I especially like how you incorporated the frog fastenings into the bag's design.

I just wanted to tell you, Katherine, Samantha and Heather are such fun and so inspiring. I enjoy reading your blog and getting to know you four by what you write and creat it just gets my creative juices going again. I loved the bag Nicola and I too have been looking at some of our old clothes and thinking, ummm I should make something out of this!!
Thank you to all four of you for being you!
Love from Justinexxxxxx

I love it! Making things out of old clothes is one of my favorite recycling projects.

Roy is such a lucky man!