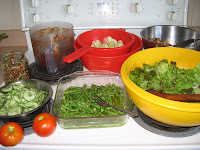 This is what happens when you're eating raw - the stove becomes just an extension of your countertop. Sure saves a lot of money on the electricity bill!

Tonight we had an odd mixture of dishes. I went out to the garden and found a cauliflower and some green beans. I marinated the green beans in a flax/lemon dressing and the cauliflower was tossed with a sundried tomato sauce.

There were two tomatoes from the bush outside, plenty of lettuce, and half a cucumber; oh yes, and a couple of avocados too. 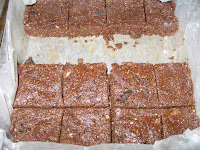 Dessert was this ------>
which I call carob fudge. It's a mixture of ground up sunflower, sesame and flax seeds, blitzed in the food processor with tahini, raisins, carob powder, agave and coconut oil. The kids all like this (I invented it a few years ago when first trying the raw thing).

I decided to re-start my weight training today and used the lightest weights for some biceps and triceps lifts. A few situps and a sun salutation and I was done. A far cry from the workout I was doing before the surgery, but I'm hoping it won't take long to build up my strength.
Posted by Nicola at 18:55

It's good to hear that you're starting to feel like your old self again. Another bonus to eating raw would be never having to clean the oven or stove top!