We none of us are big fans of haircuts around here. E has had maybe four proper haircuts in his seven years of life, two at shops, one from a friend and one from a fellow homelearner's dad. The rest of the times have just been me giving it a cut, trying to keep it out of his mouth and eyes. I find it hard to do a good job on it as he doesn't like to sit still long enough for me to comb it and then figure out where I want to cut, etc. I always do W's hair as I find it quite easy, he likes it short and I can do it with the clippers. I think E is a little nervous that I ordered Haircutting for Dummies from the library. (it's that Dummies bit that throws him, I think) I have never discouraged him from having long hair (his hair is lovely) and I admire the way he calmly corrects people who have mistaken him for a girl by simply stating that "actually I am a boy." However, I did notice the other day - when looking at a Tom Petty CD that W brought home from the library - that his hair was rather Tom Petty-ish. Now, nothing against Tom or anything but it got me thinking that maybe a trim wouldn't go amiss. I decided this time that I would actually read some bits of the haircutting books instead of just thinking that I would become a competent hair cutter by looking at the pictures. (yes, that is how I do things usually) 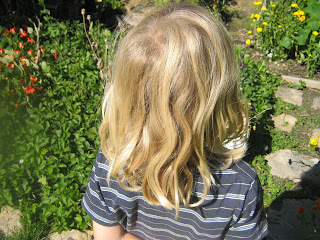 After reading a bit (and carefully studying all the pictures ) I thought I would practice my new found skills on my tomato plants first. I always like to give their greenery a bit of a trim at this time of year so that the sun rays can really get to the tomatoes and ripen them up. It won't be long until frost is a concern so I want to get as many ripening as soon as possible. Here are some close ups of the tomato plants and, as you can see, I did a lovely job with their trims. I feel quite confident that I can do an equally pleasing job on E's hair. 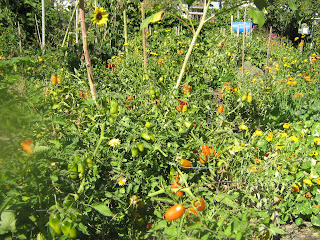 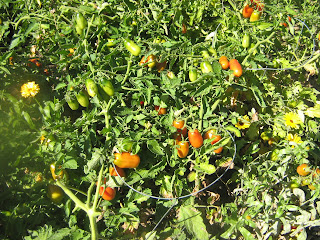 Now the other very cool thing about Haircutting for Dummies is that I found a picture that convinces me that I can cut my own hair as well. I've never liked to get my hair cut, it isn't that I am afraid that it will look bad (believe me...many times I have trimmed it myself and if you've seen my hair you know that I am not super concerned with how it looks), it is just something I have never liked bothering with. This books shows a diagram for a long layered cut that you do with only one cut of the scissors....yes, one cut. How cool! For someone who likes to be very efficient that is just the cat's meow. So I believe that I will give it a try. After all what is the worst that can happen??
Posted by Heather at 16:24

Can you cut my hair too? Pretty please :o) L is also requesting you to cut his hair. See how much we trust you!

So...does that mean you thought my tomatoes looked good after their trim?? I will bring the book tomorrow and show you. You can see if you think I am crazy to cut my hair the way they show it done. You too can become expert hair cutter just by reading bits of this book. :-)

Mrs slap-dasher becomes a hairdresser - hmmmm, the worst that can happen? Bald bits, I suppose. Oh well, at least it'll grow back!