Like many other people I like to collect quotes. I recently came across this one, by Laura Ingalls Wilder, in a book that W was reading.

"I believe we would be happier to have a personal revolution in our individual lives and go back to simpler living and more direct thinking."
I am a big fan of Laura Ingalls Wilder, not just as the little girl we read about in her books but as the author, mother and woman that she was. I've enjoyed reading a few books about Laura as an adult and I find her very interesting. I think there is much to be said for her straight-forward, non-nonsense way of living. I like her hardworking, plain living, simple logic way of life. If I had met her I know that I would have liked her very much. I agree wholeheartedly with the above quote, and the thing that particularly intrigues me about it is that she said it so many years ago. To think that at that time she thought we should go back to a simpler way of living. Can you even imagine what she would think now?
Now a quote or two from my youngest, I think of these as E isms.
The other night I was standing at the stove making dinner and E was sitting at the table.
E : Mom, what would you do if King Kong wanted to borrow your handkerchief?
Now, there likely was a time when I would have thought that was a strange question. I might have asked what they were talking about, where they had heard of King Kong, why they wanted to know that, or some such silliness on my part. This time it didn't even occur to me to ponder the question at all in that way. I simply answered that I would lend it to him right away, that if I thought he wouldn't mind maybe I would ask him to give it back (laundered, of course) when he was done with it (particularly if it was my favourite one with the blue flower embroidered on it). I said that I wouldn't want to get into a fight with someone so big over something so small as a hanky (blue flower or not). It was only afterwards that it occurred to me that perhaps I should have thought that was a strange question. 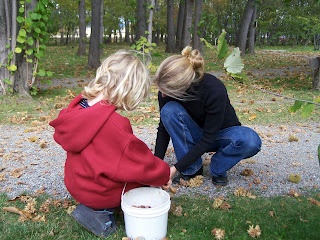 The other day I was out in the garden, cleaning out the beds and enjoying the sunshine. I could hear E playing happily in the tree house but couldn't see him because of all the leaves on the big walnut tree. Out of the constant chatter I heard -
E: Audience (dramatic pause)......you've been fabulous!!
I could not help giggling to myself. Fabulous? Where on earth does he get these things? S and I never say fabulous. To me it is a Billy Crystal word. To S? Well, he would just never say it. I think he must have heard it at a play? I just love overhearing bits of my kids' imaginative play like that. It is such a short time that we have with them to hear all their special bits of fun. I'm so pleased that I have so much time to spend with them.
Posted by Heather at 07:14

I agree. Your post comfirms the very thoughts I was thinking last as I tucked in my oldest. My eyes are misty just thinking about it. Thanks for putting it into words.
Dianne

That would be last night.

I love listening to L playing as well. This week he has been making documentaries with a British accent that would make Alan proud :-)

By the way, in his O4L, L said that E was the Double Grand Master of grasshopper catching. That's impressive!

Your words are warm and lovely Heather, thank you for posting them. I will definitely read this a number of times.

A child's creativity is something to cherish. It's nice when adults can let themselves go and be children again. We should do it more often!

We're big fans of Laura Ingalls Wilder also. I think the quote that resonated most with me was one she wrote for The Missouri Review. She was talking about being a farm wife, and she made the comment that our homes can be as pleasant as we care to make them. I think of that often when I am procrastinating on some necessary chore around the house. It helps to think of it as an act of love to make our home pleasant for my family.