Sniff, sniff...what is that smell? Greek salad, Greek potatoes? No, it's just me. I have been hit with some sort of nasty flu bug and have been ingesting copious amounts of garlic and lemon tea, nettle tea, and oil of oregano. I fear that I am starting to smell like a Greek restaurant, but there are worse things for sure. Today's menu - garlic and onion soup!! with a chaser of oil of oregano.
I thought I would post some pictures of some of the things that have been slowly, slowly happening around here. Not much has been getting done other than a lot of reading, but I have a few things to show. (ladies- after much teasing last week you will be astonished to know that I really did do nothing at all this weekend- just read. So you see, it can be done - or not done, as the case may be)
The boys harvested all our squash before the frost we had the other night. Now I am in need of many more squash recipes. 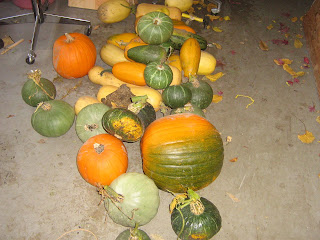 W harvested some more of our grapes yesterday. I had been putting this off until we had time/energy to make grape jelly but finally decided to just shove them as is into the freezer and deal with them in the winter. 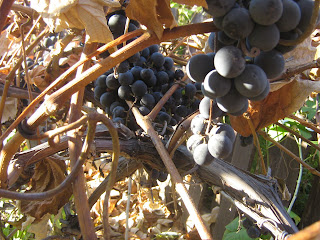 Made a delicious (sort of) curry that went down well with all of us. It is based (loosely) on a recipe from the cookbook Fresh from John Bishop of Bishop's restaurant in Vancouver. I first heard of him when I watched his documentary called Deconstructing Supper. The book and the video are well worth getting from the library. 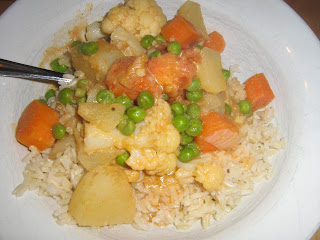 We also made this blueberry cake with a recipe that I found on Soulemama's blog. It was delicious, not too sweet, not too tart but just right, with a lovely hint of lemon. 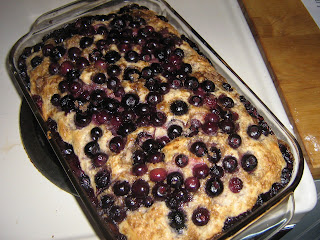 Now I know that some of you are not partial to the new natural foods grocery store in town, but I have to tell you that they have won me over. How? 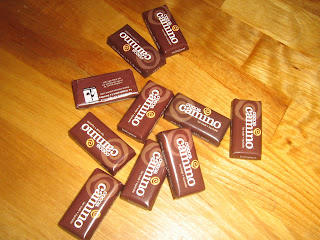 Yes, as you know, my favour can be had for chocolate. Last night, as an alternative to Hallowe'en activities) we went to the big library and then out for a hot drink at the coffee shop. Afterwards we took the boys to choose a treat at the new store( as they did not go trick or treating), and a lovely fellow there gave the boys a treat and then, well then , he gave me these. I wasn't even wearing my "I will love you forever if you feed me chocolate" shirt (I don't have such a shirt but it's a good idea, isn't it?). It's like he just knew that this was my favourite kind of chocolate and that I was having a bad week. How can I not like a store like that?
When we got home E decided that this was a new tradition, and I can tell you thatI quite like having kids who are just as happy to go to the big library as they are to go out getting candy.
Posted by Heather at 08:16

Hope your garlic remedies have you feeling better, Heather.
Wow! What a haul of squash! How many varieties did you plant this year?
Hearing about those chocolates made me remember that I found these little treats are now being sold in the bulk section at Save-On. Seems that you're not alone in your love of good chocolate. Enjoy!

What a good idea for a Halloween evening. Glad you had fun!

Hi Heather, I hope you feel better from your cold, soup is great and chocolate better still to aid a full recovery! Louise x

Well, they do use chocolate as medicine in the Harry Potter books - it's full of antioxidants and it IS a vegetable - or a fruit - a plant anyway!