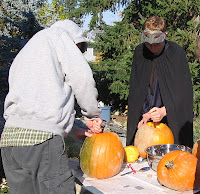 I love fall foods. I have been enjoying hot porridge for breakfast some days with cinnamon, raisins, flax oil and a little turbinado sugar. I made an apple pie for dessert the other night. And last night, I made caramel popcorn for the first time, using a recipe from The Garden of Vegan but substituting agave for the corn syrup. We don't go trick or treating so that was the equivalent of the kids' Halloween candy. 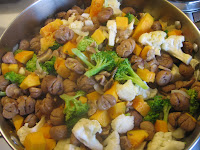 This was a tasty stew that I made a couple of nights ago that seemed very autumnal. I soaked and pressure-cooked a packet of dried chestnuts. I mixed them in with sauteed onions, garlic, broccoli, cauliflower and pumpkin, a little stock and tamari, and a splash of vegan Worcestershire sauce. 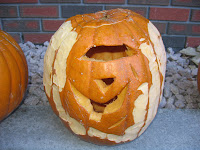 The boys have been carving pumpkins of course.

Last week, we had a lovely time at J's house. We were celebrating her daughter's birthday. The kids dressed up in crazy costumes, they made masks, carved pumpkins and decorated cupcakes with lots of frosting and sprinkles. Unfortunately, we had to leave early but we would have been quite happy spending the whole day there. Thanks J, it was a great party. 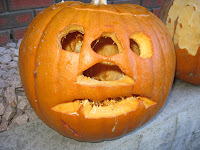 We had a quiet evening at home for Samhain. Some of our friends have colds and a joint celebration didn't come together, so I put together a simple "altar" in the centre of the dining table at dinner time. The tall centre candle I lit for my Uncle John. I had a call yesterday to say he's dying. The prostate cancer that was in remission had returned and spread to his liver and lungs. We don't know how long he expects to live, but it will be measured in days or weeks. He lives in England so I won't get to see him before he dies, or even attend the funeral. My father has never been especially close to his brother, and I haven't spent a lot of time with John over the years, but he's family and we have kept in touch since I came to Canada. 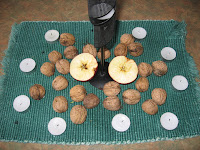 The other candles we lit for family members who have already passed "through the veil" - all four of my grandparents, all four of R's grandparents, my aunt Chris (Uncle John's wife), and the last candle for all those unnamed ancestors. 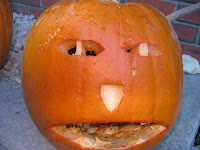 Now it's November, a month which can be rather blah, but I have that feeling of drawing inward, cutting back on the commitments, and burrowing in for the winter.
Posted by Nicola at 11:03

Hi Nicola, looks like a great time was had by all on Halloween, we had pumpkin soup. Regarding the yorkshire pudding I really can't think of any substitute for egg, if you don't use egg I guess it would come out like cardboard! I am very sorry to hear of your Uncle John in England, my mum passed away with cancer, I know how painful it is for the sufferer and for the family, it was so thoughtful of you to light candles for everyone. Louise