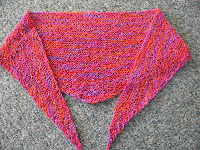 I made this bright little shawl for a young friend who's leaving the country soon to return home to Australia. The yarn is called La Playa and it's cotton and rayon. I used bigger needles than that recommended on the ball band to give a lacy effect. The plan was for something decorative rather than warm.

This green yarn is Carro Magic. It's a self-striping worsted weight yarn which I discovered just this week. I bought six balls of it and used three for the scarf and one for the fingerless mitts. I may make a hat with the rest. It took me a few hours to make this set.....with my Bond knitting machine of course. I didn't want to make it double thick, so of course the scarf edges curl in like crazy. I almost forgot to mention that this is a gift to myself! 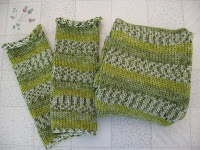 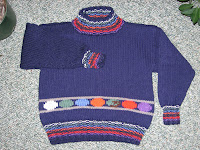 And finally a sweater for my 9 year old. I measured a sweatshirt of his to get an idea of the size, figured out my gauge with the TLC Essentials yarn (on the Bond again) and whizzed up the main pieces in one evening. It took me a lot longer to hand knit the ribbing, sew it up, and embroider the pattern across the front.

The design was inspired by the Scholastic books by Emily Rodda called Deltora Quest and Tales of Deltora. The seven ovals across the front represent the Belt of Deltora - seven gems whose initials spell out DELTORA - diamond, emerald, lapis lazuli, topaz, opal, ruby and amethyst.

I'm glad to say the sweater fits with growing room to spare. I hope he wears it!
Posted by Nicola at 00:00