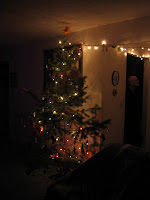 My 9 year old son S is definitely "on the ball". He knows Yule is approaching. This will be the third year that we celebrate the Solstice, having thrown Christmas and Santa over for a more meaningful (to us) celebration. 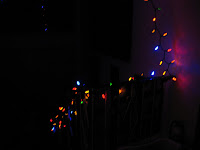 We went out on Sunday to cut a tree. Here in British Columbia, Canada, we can go online and print out a free permit to cut our own tree. We like to have a natural tree and it is cut from a place where trees are likely to be removed anyway, such as BC Hydro easements or logging areas. It was snowing and wintry and just right for doing the deed. 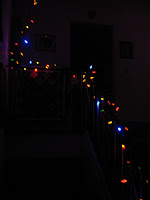 On Monday evening, once the tree had had a day to acclimatize in our basement, R set up the tree in the living room. It was my job to string up the lights and then I left the boys to hang the ornaments. I used to be really fussy about this part, wanting things to be evenly spaced and just so, but I let that go a long time ago! 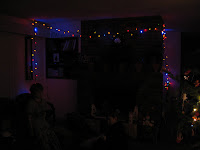 We bought some new lights this year... LED ones... the outdoor kind because they were 25 per cent off! We strung them around the fireplace, around the chimney breast, and down the stairs. The lights on the tree are the old minilights - starting at the bottom of the tree I wound them around then carried on around the dining room until the whole room glowed. 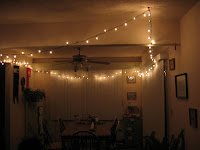 Of course all the lights had to be turned off while the tree was being decorated, then we had an official light up. I took these photos without the flash so they are rather dark, but I'm sure you get the idea. 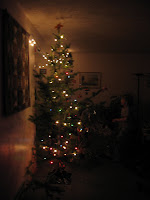 As I said at the beginning, S is the organized one. He was the one who insisted he wanted the tree NOW and as soon as it was all set up he placed little gifts, bought and wrapped by himself, under the tree for the rest of us.

To read some Yule Lore, click here and scroll down.
Posted by Nicola at 09:15

Wow, I'm still in denial that it's already December!!

Hi Nicola, great lights, I wish I could get the motivation for putting up the decorations this year, I know I have got to clamber up into the loft space to find everything, J isn't into the decorating thing so it is always left to me, although once they are up I do like them, but putting them away is always such a chore. Oh dear I do sound 'bah humbug' don't I, you wouldn't believe that I really do quite like Christmas would you? x PS: Thanks for the tip with the books, I really do think they sound good. I must try to make more time next year for reading, I don't even get around to reading magazines these days!