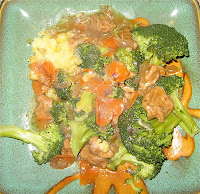 I made a rather tasty stew for dinner today. My dear children tend to prefer plainer food, but now and again I rebel and make something that I know hubby and I will like and to heck with the consequences!

First I had to make seitan. Now, the first challenge is knowing how to pronounce it! Is it zyten, satan, say-tan? I’m not sure. Anyway, it’s a rather useful protein food made from wheat gluten that’s a good replacement for meat. I’m sure you can buy it ready-made, but it’s really easy to make.

You need wheat gluten, which is not the same as wheat flour or high-gluten flour. It’s JUST the gluten. I buy it from my favourite health food store. You *can* make it with ordinary flour, but it’s way more work. All you do is mix in some water until there’s no dry gluten visible and knead it a bit. It becomes VERY rubbery and weird-feeling.

Then you just cut it into little pieces (bear in mind it will double in size) and toss it into a large saucepan which is half full of boiling water, a couple of stock cubes, a splash of soy sauce or tamari, and a dash of VEGAN Worcestershire sauce**. (This last ingredient was an inspired addition today and it made for a very good result.)

Simmer for an hour. Drain it and use it as you would meat.

Today, I kept the “stock” and used it in the stew. I sauteed an onion, some very thinly sliced carrots (trying to get them in under the kids’ radar) and lots of garlic. Threw in a heaping spoonful of flour, then added the stock gradually to avoid lumps. Add the seitan and leave to simmer for as long as you like.

I found a few potatoes in the pantry, some broccoli and lettuce in the fridge, and that was our meal. I will definitely make the stew again - but double the quantity.

For dessert, I had been promising hubby I would make him a coconut cake for some time. Samantha’s book, Eat, Drink and be Vegan by Dreena Burton has a coconut cake recipe which I used for the cake part (leaving out the almond extract because I didn’t have any). However, the frosting in the book was made with silken tofu, vegan cream cheese and macadamia nut butter, among other things. R prefers to avoid soy as much as possible, and I didn’t have the second two ingredients, so I mixed Earth Balance Buttery Spread, some fine turbinado sugar, and some thick creamy coconut milk, and that made a yummy rich frosting to sandwich the two parts of the cake together. One warning....it needs to be kept chilled. Not long after I took this photo I found that the frosting had melted a little and had travelled southwards! I put it into the fridge until we were ready to eat. It was a hit! Everyone loved it.

**Ordinary Worcestershire sauce has anchovies in it, which are not vegan!
Posted by Nicola at 18:24

Nicola, don't be cross with me, but I would have to use chicken in your recipe, I am very lazy when it comes to trying out unheard of ingredients to me? Your cake looks lovely. I have had the top half of a cake roll off, due to slightly melted buttercream, your trick of putting in the fridge does work. x

Chicken! How could you say such a thing :o)