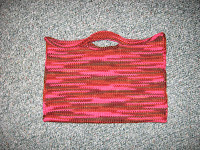 I zipped into Zellers this morning, aiming to pick up some yarn to make a cute hat for the daughter of a distant cousin living in Edmonton. While there, I found this - some Phentex chunky acrylic in a colourway called Rustic Rouge. (Don't you just hate that combination of English and French?)

The yarn is very soft, made in Canada (that's a plus) and combines shades of pink, cinnamon and chocolate. I had a thought in the back of my mind that I wanted to make something for my mum's birthday in March, and a bag seemed like something she'd use.

This project didn't even get into my Ravelry queue, it went from idea to "finished object" so fast!

I am providing the pattern here, as I "unvented" it myself, and will link to it in the sidebar as usual. As the handle is formed like a buttonhole, I have used that in the name, and I hope I'm not breaching anyone's copyright.

Cast on to 58 needles with e-wrap. Starting with carriage at right, knit 6 rows.

Next row - with carriage on right, push the centre 16 needles towards you into forward holding position. Knit the first part of the row, stopping when the carriage reaches the centre. Lift the keyplate out of the carriage and slide it to the left, out of the way, while you bind off the 16 stitches in the centre. Make sure the last stitch bound off is transferred to the live stitch to its left, leaving those 16 needles empty.

I bound off using the transfer tool and the basic instructions in the instruction book. Push the centre needles back to non-working position. The yarn is then coming from the correct place to continue knitting the row. Move the carriage back to the centre, replace the keyplate and knit the rest of the row. Carriage is now on left.

Take a short piece of yarn (if you’re knitting from the centre of the ball, snip it from the outside tail) and e-wrap cast on to the 16 needles in the centre. Hang a small weight onto the end of the yarn. Leave the needles in forward working position with the latches open, so they will knit.

Knit 110 rows. For the first couple of rows after the hole, push the centre needles towards you into forwards working position so that they knit easily, then hang a weight (I use a bulldog clip with a magnet for extra weight).

Weave in yarn tails either side of the holes, adding a couple of reinforcing stitches for strength. Sew or crochet side seams (I used a 6mm crochet hook to single crochet along the outside of the bag).
Posted by Nicola at 19:21