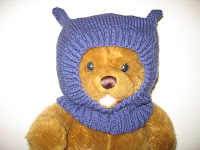 I want to remind our dear readers that you only have until Wednesday morning (Pacific time) to leave a comment on our anniversary post and be entered in the draw for the bag, book and chocolate!

And while I'm here, I want to show you a little hat I knitted for a distant cousin of my husband who lives in Alberta. She had a baby daughter last year and we only heard about it in her annual New Year's letter, so I'm going to send this to her.

The pattern was on the ball band of the yarn, which is Phentex Merit. It's called a Pussy Cat Hat and has some rather nifty shaping to make the "ears". The instructions asked for 3 balls and #7/4.5mm needles. As the smallest size was a 2, I knitted it on #6 needles in the hope it would be more appropriate to a 1 year old and I shortened the neckband ribbing a little (after all, babies don't really have necks, do they)! It only took one ball which means the total cost of the hat was less than $1.50.

It fits teddy very nicely. I think this style is a good one for babies as it keeps the back of the neck warm without a scarf.
Posted by Nicola at 09:55

Sweet hat, Nicola! You're so right, this style is great for keeping the back of a babe's neck warm. I was fortunate to receive a handknit hat similar to this (minus the ears) when my first son was born. It was my favourite one to have him wear.

I better not let my mum see this, she might knit me one, and while I think that it is very cute I don't think I could pull it off, fashion wise that is!

I am in love with this little hat. Any chance you could share the pattern with me?