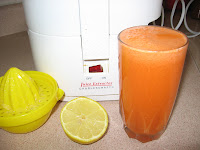 This was my breakfast yesterday morning - fresh juice made with 6 carrots, a grapefruit, an orange, an apple and half a lemon.


Below is a goofy picture taken by my dear son, who tends to get hold of the camera and take decidedly unflattering photos of me (this was the best of the three he took)! 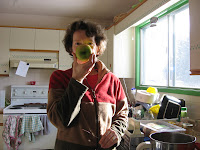 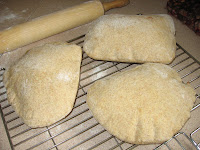 Dinner last night included tapenade (which is a very tasty mixture of sundried black olives, sundried tomatoes, olive oil and garlic). The recipe is from The Garden of Vegan by Tanya Barnard and Sarah Kramer. I also made two kinds of salad, some flax crackers made by soaking flax seeds for a short time, spreading them out on a cookie sheet and dehydrating them for a few hours, and these pita breads. (No, I didn't only make three, there were eight, and I could have made twice as many and they would have gone in one meal.)

I was pleased with how they turned out. I can't recall the exact quantities of flour, yeast, agave, salt etc but I increased the yeast and sweetener more than in my usual bread because I wanted them to puff up. Five minutes at 450 deg F and they 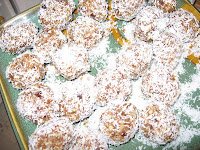 And finally, my date and nut balls - er, I mean energy orbs! Heather has a recipe (see link in sidebar). The one I found in my recipe file is slightly different, but very good. I soaked 15 fresh Medjool dates in water for half an hour. (If you have never eaten these dates, you are missing SO much - they are 100 times better than those sticky pressed ones that you get at Christmas. And as for dried dates - yuk - don't bother!) Anyway, I digress. Grind up 2 cups raw almonds in the food processor, add the soaked dates (but not the soaking water), half a teaspoon of cinnamon and half a teaspoon of vanilla. Process again. Take small spoonfuls of the mixture, form into balls - sorry, ORBS - and roll in coconut.

I was thinking that these would make good snacks, but some disappeared almost immediately, and the rest were "dessert" after dinner. (Youngest son said he had at least 11 of them! Middle son, unfortunately, didn't get further than a teeny bite. It would be so much easier if everyone liked everything.)