It's about time I caught up... 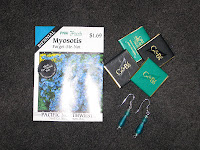 Here's a reminder that I have a contest running right now - if you look at the top right of our home page, you'll see a link to click on where I'm asking for ideas for airplane knitting. I never did tell anyone what the prize was, so here's a photo of what I have collected so far. Some small chocolate squares, some flower seeds, and some earrings that I made this evening from silver wire and glass beads. I will be on the lookout for any other small items I can tuck into the padded envelope.

The contest is still open for entries and the deadline will be March 31st.

I haven't posted for over a week, I think. There just don't seem to be enough hours in the day. My head is full of thoughts of Taekwondo, trying to memorise the material I need for my test next month. I need to practise every day. I'm going to classes three nights a week.

Since Sunday, when R and I spent a lot of time in the garden, picking up and bundling fruit tree prunings and clearing out old fallen leaves from last fall, I am feeling the pull to be outside each day. The sun has been shining - it was up to 16 degrees Celsius today - and it is so calming being outside, raking up leaves, pulling up dead stalks and making things look tidier. My yard is quite low maintenance. Most of it is lawn, which I have no problem mowing during the summer (takes an hour and a half with the gas mower). It'll be a while before I have to do that. In front of my house, there's a bed with lilies and hostas and ferns which come up by themselves every year. Behind the house is a bed that always looks messy but the lavender is taking it over year by year. At the moment, there are some tulips on their way out.

Further down the yard is another large bed which will be full of shasta daisies and lilies, but I'm not sure what else will pop up in there later in the year as I have put in lots of flowers in the past but they often get strangled by weeds - I'm not a keen gardener as a rule, and weeding is usually only done in our vegetable patch by R on weekends.

I think I may take out the rocks that edge this bed and if it gets too untidy I can just mow over it! (Oooh, I can sense Heather shuddering!)

R has been ordering seeds and some arrived in the mail today. He's the one in charge of that side of things - he has enjoyed gardening since he was a child and spent a lot of time in his greenhouse (that was probably a good way to get away from his two older brothers)! So he knows what he's doing.

So I had this long list of things I would have liked to get done today but few of them actually did get done. Part of the problem may be that I was finishing off The Eagles Brood by Jack Whyte. This is the third in the Dream of Eagles series - The Skystone was first, followed by The Singing Sword. These novels were recommended to me by a friend and they are excellent, full of historical detail. Very violent though, as no doubt it was 1600 years ago in Britain. Being engrossed in a 600 page book is not conducive to getting things done either.

It's the Vernal Equinox (or the Autumnal Equinox if you're in the southern hemisphere) so we now have 12 hours of daylight and 12 hours of night. We don't celebrate Easter in our house. I was brought up by parents who only went to church for weddings and funerals, so Easter to me meant chocolate Easter eggs. That's it, no egg hunts or Easter bunnies or church services.

This year I am celebrating Ostara, the pagan sabbat, in a very informal way at home. I have been interested to read that the egg hunts and the bunnies are both based in pagan lore, representing fertility. So I'm thinking I may get the boys making papier mache eggs (vegan of course) which we can paint. And we plan to make some lemon poppyseed cookies, seeds being very important at this time of year.

I'm curious to know what seeds R got. And yes, I was shuddering thinking about those poor plants being run over by the mower in the prime of their lives. ;-)