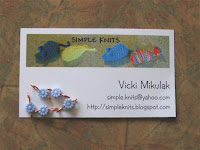 I had a nice surprise in the mail today. Some stitch markers arrived from Vicki of Simple Knits. I won these by contributing patterns to her list of "What can I make with 285 yards or less of yarn" patterns. Great idea!

I just love getting fun things in the mail - way better than bills!

I have had my five hours of Taekwondo this week over three evenings, and this morning I fitted in some weight training. My body feels pleasantly tired. I have an interesting array of bruises up my arms from sparring. Because we partner up and then rotate partners every couple of minutes in class, I can be sparring against people of varying ages and sizes. There is one other mum in the class who's a little younger, a lot taller and very strong. There are also a number of teenage boys, and a couple of tall men in their 20s and 30s. Needless to say, I got worked over on Tuesday night! I suppose it's a good thing to learn how to take a few knocks as when I enter tournaments I will need to be able to handle it, though at least in a tournament you are placed with others of your age, sex and rank. (Having said that, I did get a nasty kick to the chin once from a woman from Prince George in a tournament.)

Since I started up the weights again, I'm using a different method. Before I took a break last year, I had a four day rotation. Each day would be a different area of the body - chest and shoulders, back, legs, arms - plus ab work every time. I had four different exercises for each area and aimed for three sets of 10 or so.

Now what I do is work the whole body each time, every other day if I can. This works better for me as if I miss a few days (or longer, ahem) then one part of the body won't have been neglected more than another. So for each area - shoulders, chest, upper and lower back, abs, biceps, triceps, forearms, quads, hamstrings and calves - I perform one exercise. I start with 10 repetitions of a low weight to warm up the muscles, then move to a medium weight for 10, and finally a weight which is heavy enough that I can't complete 10 reps. The idea is to strengthen the muscles and get them to bulk up. I'm hoping this method will have the desired effect.

Tonight, at the extra class designed to prepare us for our black belt test, we discussed board breaking. We practised the techniques we'll need by hitting and kicking pads. We're going to be chopping a lot of firewood on the day of the test, that's for sure! Knife hand strike, front kick, side kick, back kick, turning kick, 360 degree flying back kick, flying side kick over an obstacle (which will probably be people kneeling on the floor), a double kick where we're supposed to break a board with each foot at the same time in the air....

Hmmm, I hope I'll be able to walk out of the dojang after that lot!
Posted by Nicola at 21:12

Wow, what a work-out routine you have got going. I admire your discipline. Oh and if you need a volunteer to be the obstacle when you do your flying side kick... umm... I am pretty sure I am busy that day. :-)