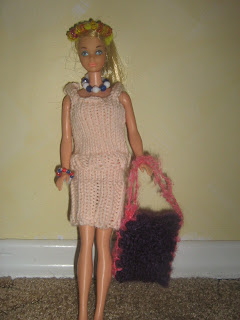 This is too much fun. I thought I was going to make a dress but as I was knitting I decided to do a skirt. I really like the way the skirt turned out, it reminds me of those old wool flat front skirts with the pleated bottoms - the kind my grade 12 English teacher always wore. I'm not entirely pleased with the top, the problem is that you have to make the armholes big enough that you can get it onto Barbie's body but you don't want it so big that Barbie's breasts are exposed. Actually that isn't the problem, that is just my excuse. The problem is that I've no idea what I am doing, I'm sure a more experienced knitter (AKA Nicola) would have no problem with the tank top straps and would have grafted them nicely so that they wouldn't be lumpy like mine. See Nicola, I'm learning, at least I know what I should've done. I actually did think of that while I was knitting it but the problem, you see, is that I was watching the Alan Rickman movie - er, I mean Blow Dry- and I needed to give it my full attention. I still need to follow step-by-step instructions when I am doing the Kitchener stitch so it was either miss Alan and have nice flat seams, or see Alan and have bumpy seams - poor Barbie, she didn't have a chance. 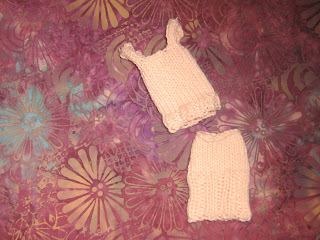 E decided this morning that Barbie should have some jewellery so he went to make some and W joined him. The tiara is done by E and the necklace and bracelet are done by W. I love that the boys enjoy doing stuff like this, that they don't think it too "girly" for boys to do.

Oh yes, and we found the one and only Barbie that I have left that my brother did not torment when we little. She has all her limbs as well as her head, amazing really.
Posted by Heather at 08:44

Hey, and she even has hair! That means she faired better then most of my barbie's.

I have ZERO talent when it comes to knitting, so I am inawe of these sweet little creations. Do they come in my size?? ha. Just kidding.

Yikes Samantha, I was just thinking yesterday as I was trying to trim my hair that I should really just ask you to do it since I know you do R's. But if you used to cut your Barbies' hair and now they have none perhaps I won't ask.....

Hi Kelly
I was actually thinking that I would like a skirt like the pink one in my size...but that would use a lot more yarn and a lot more time so likely it won't happen.

What a great outfit - love it that your boys had fun helping accessorize her!
xojacq

Looks like you've been having some fun! You've found another great way to use up the bits of leftover yarn to make something cute. Barbie has never looked so chic!
Kudos to the boys for jumping in to help finish off her look.