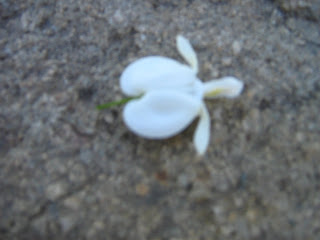 So here you go, I'll give you the bare bones of the story as it was told to me and then a bit of an alternate that I have heard since. A bit of gore at the end so keep that in mind. In this story you are taking apart the bleeding heart flower bit by bit and using each bit to tell that part in the story.

Once upon a time there was a beautiful princess and a handsome prince (were there any other kind of monarchy?). The prince loved the princess and wanted to marry her. He asked, she said no. He figured if he gave her some pretty fantastic gifts then he would win her heart.(big, big red flag, not worthy)
He gave her some bunnies (normally they would be pink but alas, no pink bleeding hearts left here- so white will have to do -no wonder she wouldn't marry him - plain old vanilla bunnies? not very original) 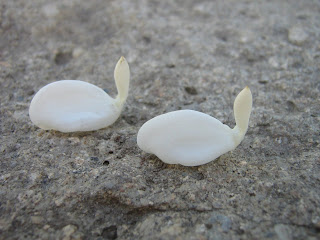 She still said no. So he gave her some beautiful dangly earrings. 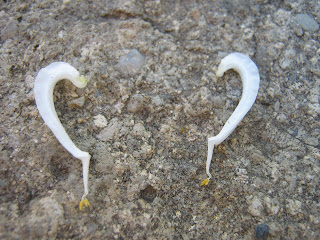 Still, no go. Gave her some lovely slippers. 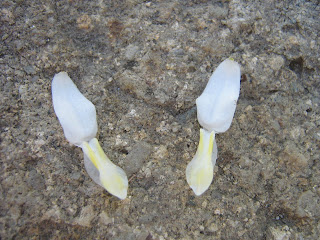 Nope, she's not buying it.

So, since he could not have the love of his life, he took his sword (that's the green bit - you have to use your imagination a little) and stabbed himself in the heart. 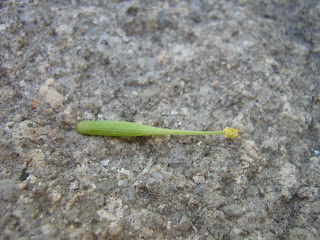 There you have it - how the bleeding heart got his name. Of course I like to jazz it up with a bit of flourish when I tell people in person. ;-)
O.K and now the newer version I have heard. Same story 'til you get to the earrings - no earrings in this story, skip that bit and go to the slippers, save the earrings to the side. Now when you get to the stabbing part you show the part you used as earrings like this 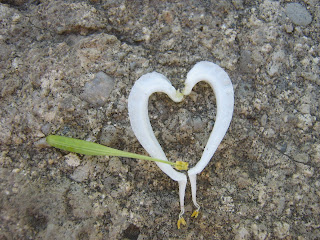 and they make a heart shape. I quite like that bit, actually. So here is a pic of all the bits. 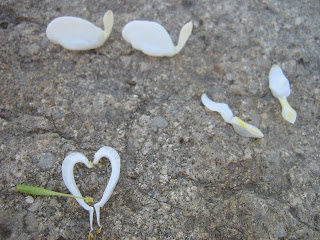 Thanks, Heather. This does seem like the version I was told as a kid. Now I'm waiting to hear what your boys will come up with because the flower shape does resemble a sea turtle...

Love the sea turtle image! Can't wait for the story!
Imagine that, this is a completely different story than what I was told! The parts were all taken apart in advance, and the poor maiden (just the green stock) was poor and lonely and homeless. The 'fairy' queen found her and gave her all those gifts, the slippers, the crinoline, followed by the beautiful dress and she lived with the fairies (you could then see the others, all dressed, hanging on the vines)in the beautiful plant. They'd come alive at night and hold lovely parties and dance into the night drinking nectar and eating honey and then turn into flowers during the day, as their disguise!

p.s. and the little fairies were hanging by their feet on the vine, you tipped it up so the heart was upside down to reassemble the flower as you told the story...

Oh, I like your story too. WOuldn't it be nice to make a little fairy garden and then have bleeding hearts growing in it. Do your kids make fairy gardens? We haven't for a while, maybe today we will.

Two days ago I picked a bouquet with some white bleeding hearts and put them in a vase at children's library where I work. Today a little girl named Damaris-who is bilingual in Spanish and English-informed me that her mother and grandmother call this flower "tortuga", which means "turtle" in Spanish. Have you ever heard that? I was so excited that I came home and googled a bit and found you!

Love your bleeding heart stories. My Mother story was a bit different. The sword was a bottle of champagne.
I blogged about it too.

Hello! I hope you don't mind me using some of your flower-part pictures for my Myths & Legends 101 post over at Tales from the Hollow Tree. I'm on vacation at the moment and had limited time to find images of these lovely flower parts. I have left credit at the bottom of the post and linked to your blog post, but if you'd like me to use different pictures, please let me know and I will replace them. :)