We enjoyed the afternoon at Mission Creek Park today. They offer a wide range of environmental education programs. Last week we learned about waste reduction, recycling and composting. Stefanie's blog has some good photos of that.

Today the children played a game called Environmental Survivor. They learned about the dangers that face the kokanee salmon and played a game in which they were the fish trying to avoid pollution. 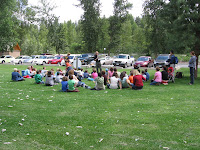 It rained on us briefly but it didn't dampen our spirits!

I thanked the leader of the games afterwards and wondered whether I was the only one who found it annoying that he had mirrored sunglasses on - and he'd had them on the whole time he was interacting with the kids. I hate talking to someone when I can't see their eyes.

Our homeschool support group is a very informal one. No committee, no meetings, no fees, just fun days at the park or the beach and the occasional field trip. I have noticed that the field trips attract more families than simple play days, which I understand in one way, with us being homeschoolers and wanting to take advantage of "educational opportunities", however I think that the kids learn just as much from their unstructured play time and they certainly have a better opportunity to get to know the other children and make friends when we're just hanging out at the park. It's the people who come regularly that get the most out of the group.
Posted by Nicola at 21:16

That was a great field trip and thank you so much for setting it up Nicola! Looking at the picture, I realized that it was probable the closest most of our children have been to a classroom situation and what a perfect "classroom" nature is.

I think we overlook the importance of the moms having "play" time as well and I for one definitely feel recharged after a visit. I have noticed we are getting more "regulars". Hopefully they will continue coming!

So true, so true.