Scrapbooking is not a subject you've heard about on this blog before, but this enforced time at home had me thinking that it was time to update the boys' scrapbooks. These are not fancy schmancy, mega-expensive works of art. They are just three zippered 3-ring binders with a couple of extra pockets, different colour for each kid, and bright coloured cardstock for mounting photos etc. And it's been at least two years since I updated them so it's a good thing I pulled them out and did some work on them. I realised I need a few more photos - the plan is to have at least one for each year of their childhood. The digital camera may be great but since I had mine I have never printed out any of the photos. The poor grandparents have been going through a dry spell (they don't have computers). 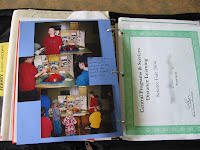 The binders contain all sorts of paraphernalia, such as pregnancy and/or birth diaries, ultrasound printouts and birth congratulation cards, lists of first foods, first words and first teeth, artwork, newspaper clippings, certificates and of course photos. My mum made one of these for both me and my sister and it's a wonderful way to keep some of the memories. 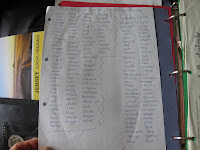 Above is a list of all the words that my oldest could say at a certain date. Below, a ton of baby cards tucked into the front inside pocket, some first day cover stamps, special coins and one of his first photos. 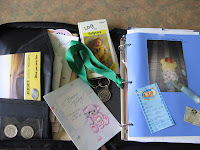 Now for a peek at the middle son's binder. His ultrasound printout, hospital wrist and ankle tags and another pile of birth congratulation cards. 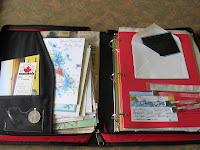 A cute little paint print of his hand and foot and a list of "firsts". 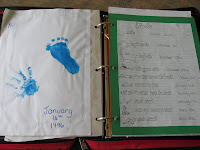 And a lovely photo of the back of his head after he had it stitched up. He had fallen on the wet slippery tiled floor at the local swimming pool - I will never forget the sight of the blood spreading out from underneath his head. He really screamed when they stitched this one. He has been to the ER three times for stitches. Once we were out of town, staying at a hotel, and getting out of the bath he slipped and hit his chin on the side. The third time was when he was running through our living room and fell against the slate fireplace and had a rip in the side of his nose. After an evening visit to the ER, we had to take him back the next day for a general anesthetic so a cosmetic surgeon could do a proper repair job on him. 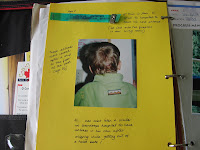 And finally, youngest son's binder. He was born at home (according to plan) so no little hospital tags for him. He did have a very cute little stretchy hat that he wore constantly for the first few days, and it's in the pocket on the left. 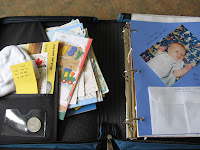 He was SO cute at one. Below is a record of when his first teeth came in and some notes about what he was up to when he was one. 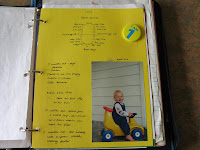 One of his Taekwondo certificates and a picture that he drew a couple of years ago that, until today, was displayed in my kitchen but now has been "archived" into the binder! 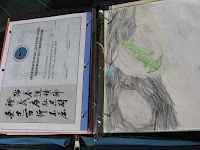 I just loved revisiting these today, and I'm so glad that I kept up the record collecting even with the third child. You know the story, first child, hundreds of photos, second child, half as many, third, one or two if you're lucky!
Posted by Nicola at 17:53

Labels: Kids, Sewing and other crafts