The Story of the Cable Hat

Once upon a time, there was a semi-intermediate knitter who completed a beautiful Irish Hiking scarf. Confident in her ability, she decided to make a matching hat (it can get cold while hiking in Ireland). All was going well until the final decreases where she realized that the hat was looking a wee bit small. She tried on the hat and alas, it was too small. Way too small. A beanie on her head would not be keeping her warm in Ireland.

Ignoring the mocking laughter inside her head as she remembered a recent picture drawn by her son where her head seemed unusually enormous, she ripped out the hat and started again. This time she was planning ahead. She added an extra row of ribbing, added on an extra cable and knitted the rows that she forgot to knit last time in her excitement to begin the decrease (these extra two rows had nothing to do with the beanie hat not fitting on her very normal sized head).

Once more I must say alas! As she began the row to start the decrease, her intelligent inner voice said "maybe you should knit one more cable on the hat..." I'm sad to say that she ignored this inner voice. And when the hat was finished, it was once again too small. 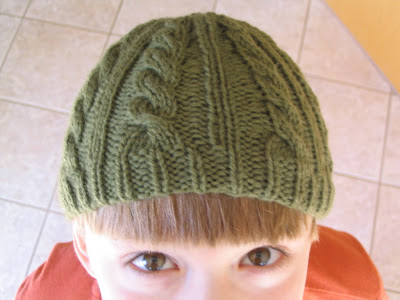 her sweet son loved the hat and claimed it as his own - a good thing this was since there was no way she could have brought herself to knit the pattern 3 times in a row! They will be wearing matching knitwear as together, they hike the lovely green trails of Ireland. 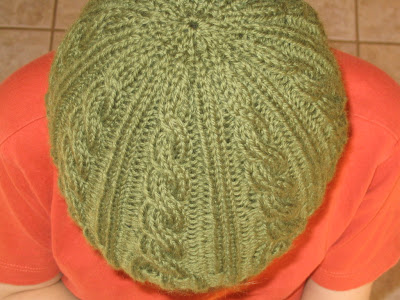 But this is not the end of the story. She will knit this pattern again one day and it will fit her perfectly and keep her warm on her journeys!
Posted by Samantha at 15:58

You know her well I suppose.

Tell her that I love her if you could please.

That would be splendid.

If at first you don't succeed, try try again. And keep trying, soon the whole family will have hats! It is a lovely "wee" hat.

Lovely hat, Samantha. Yes, you will have to knit another one because whether the hat fits your head or not, this pattern just looks so darn impressive.

See, you like a happy ending to a story too. ;-) BTW, I just started reading that story at your last couple of lines, that way I got to the good ending part right away.Wha ha ha ha.