Need a quick snack? Hows about some chives?

Quite often I look out the back window and I see E wandering in the garden, he is doing something that I have come to think of as "trolling". Ever since he was a wee one, as soon as he was able to walk, he would toddle around the yard picking things and putting them in his mouth. As much as I wanted him to enjoy his veggies there were time when I found this very frustrating, like when he would pick all the apples or peaches that he could reach and eat them, even though they were only the size of a golf ball. The other day I looked out and saw him crouching over some herbs trying to find something big enough to eat, I went to get my camera and snapped a picture just as he was shoving some sorrel in his mouth. I'm thrilled that he loves to do this and I would never want him to stop - not even when it has meant that he gets all the strawberries and we get none. ;-) 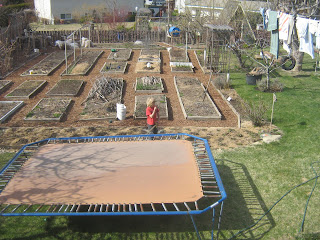 Yesterday I was out in the garden and I noticed that my chives looked quite picked at. I thought it was strange that he would have eaten so many because both clumps looked the same. and that really seemed like a lot of chive eating for one kid. I wondered if the dog had suddenly taken a liking to chives or if we had some weird allium loving critter about - and if so would I need to take measures to protect my garlic !?! I asked E about it today because I thought it was possible that he had eaten them all himself, but he let me know that he and his friends had snacked on them while they were playing in the backyard. I laughed at that...I feel certain that his friends' moms would be quite surprised to know that their boys were happy to snack away on chives. ;-)
It just goes to support my theory that if people can be more a part of their food production, if they can actually see, hear, feel and smell things while they are growing, they will be far more likely to appreciate and enjoy those things...no matter what their age. 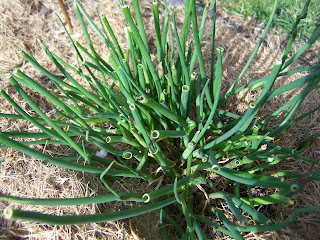 That is so cool that they can go out in the yard and grab a snack! Erich's Aunt loves to tell the story of how his cousin wore down his baby teeth from all the dirt he would chew on while he was munching away on carrots...pulled right from the garden. Beautiful!

My children having been making 'sushi wraps' from the garden. They are surprisingly good. They take a swiss chard leaf from plants that over wintered in our garden and use this to wrap up combinations of mint, garlic chives, chives, lemon balm, lovage, parsley, and violets into a neat little snack.

Fun to hear that your kids do that too, E does this with lettuce leaves. (he just calls them wraps) His can have a variety of herbs in but they seem to always include dill, I think that must be a vital ingredients in his. ;-) Last Summer he was giving "tours" in our garden and I think a few unsuspecting visitors had to sample these wraps as part of their tour - whether they wanted to or not. It's funny though that all the kids that he has made them for have seemed to enjoy them. Good to hear from you.

Joanne - E used to just sit and actually eat the dirt when he was a toddler...actually eat it!! It was bizarre, but I've since heard that it is not uncommon. He never did it enough to wear his teeth down though, Erich's cousin must have been eating a lot of carrots. :-)

Never knew chives were a snack food! I guess it would be easy to sniff out the person(s) responsible for eating it...