Our oldest cat has been a part of our family long before we had children, she is going on 16 this year. For the last few years she has been in pretty poor shape (such that when we go away I dig a grave in the garden just in case she dies while we are gone). I have seen some improvement with trying different diets with her -changing from kibble to raw and now to mostly cooked sardines and oats with some additions. For my own health lately I have started eating coconut oil - yes, straight from the jar - and since she was watching me as I was eating a spoonful I thought I would see if she wanted some too. I have been feeding it to her for just over a week now and I feel as though she is improving even more, although it could just be that Spring has finally arrived and she is feeling better because of the warmth and sunshine soaking into her old bones (I can relate!!). 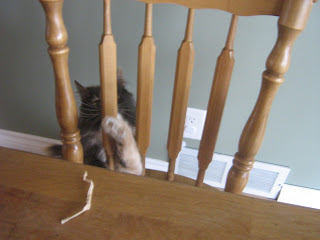 At any rate, she has been a real source of entertainment to us this past week. It is as if she thinks that she is a kitten again. She hides behind the laundry basket in pounce position; tucks herself in by a big plant my Uncle just gave us, as if she is queen of the jungle; swats at yarn and tries to jump on it and run after it; runs, hops (!?!) and hides when we come round a corner and all manner of other silliness. The other day she was watching intently as I picked dried bits off an aloe plant that was up on our table, I decided to wiggle the bit a little to see what she would do. 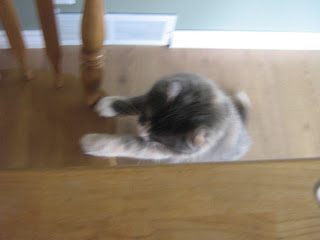 For a cat who could barely get herself onto the seat of the couch several months ago (and was barely able to walk a year ago) I was delighted to see her reaching up to the table top to play. Last night W was in the garage, he looked out the back to see her in the backyard heading back towards the steep stairs leading onto the porch, he rushed out so that he could help her up the stairs only to find that she was already on the porch. 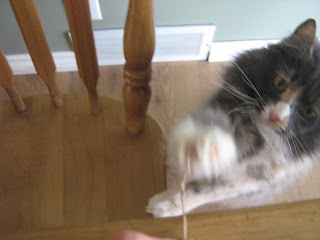 Pets...there are times when I wonder what on earth possesses me to bring them home and then there are times that I can't imagine my life without them.
Posted by Heather at 07:59

So it sounds like you've stumbled upon the diet that reverses the effects of aging... do you think the cooked sardine and oatmeal diet with a dab of coconut oil will work on humans as well as cats? ;o)
I'm not volunteering to try this diet, mind you. Would you?

Hmmmm... maybe it is something in the air??? We figured our dog wouldn't make LAST Spring. We were told to put him on meds to keep him comfortable for the rest of his (presumably short) life. He could no longer climb the stairs to our deck or jump up on the picnic table. Fast forward to this Spring (no meds since last Summer) and he is acting like a puppy even though he is 14 1/2 years old. I've always hated him jumping up on the picnic table, but I am now happy to say that he is doing it again. He was stone-deaf last Spring and even his hearing is improving... he can hear me whistle for him now... go figure.... (maybe he has a stash of coconut oil that I am unaware of -- HaHa!!!)
I, myself am always a little leery of non-pet people. I always tell my hubby that he is SO lucky that I am allergic to cats because I would be the Crazy Cat lady in our neighbourhood. As it is, I am always visiting with the neighbourhood cats and having to medicate myself afterwards.
I can't imagine life without animals....
Have a fabulous weekend.
Rebecca :)

Well, Katherine, you could just substitute blueberries for the sardines in the oatmeal and then you would probably be willing to try the age-reversing diet. I know you like to sub out things in recipes as much as I do. ;-)

Wow, interesting to hear about your dog too, Rebecca. I wonder what it is that made him start feeling better. I think my husband would be quite pleased if I was allergic to animals, I had to stop volunteering at the SPCA because I wanted to bring then all home if they weren't getting adopted right away. ;-)