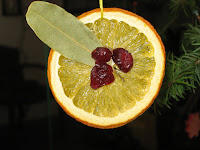 I uploaded a few photos off the digital camera tonight and found some I'd forgotten about! 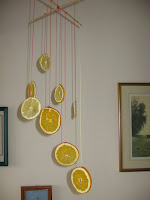 Last week, I dehydrated some apple, orange and lemon slices and the kids and I had fun with the hot glue gun and some bayleaves and dried cranberries. I also made a wreath for the front door with greenery gathered from the trees at the bottom of the garden but haven't got around to photographing that. 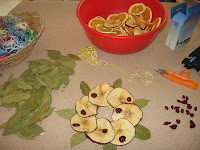 Now, I want to know why fruit cake gets a bad rap every year. People make jokes about it! I love fruit cake, but I'm talking about the kind that's home made and eaten fresh. It's not the dry stale plastic-wrapped kind from the supermarket that's made with white flour, white sugar and tons of artificial crap. So what if the kids don't like it - that just means R and I get to eat more! 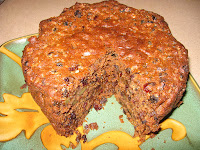 Just in case you're ready to be converted to fruitcake-ism, here's the recipe I used today, adapted from an old paperback book called The Cranks Recipe Book (a restaurant in London, England). I haven't converted this recipe to cups, so you'll have to get your scale out for this one.

Mix all together (except the sherry or rum) and pour batter into an 8 inch cake pan lined with parchment paper. Bake for two hours at 300 F or 150 C. Allow to cool slightly in the tin, spoon the sherry or rum over the cake if you're using it and leave to get completely cold.

This cake doesn't have a long shelf life but that's OK because one slice is never enough!!!

Oh, and I just had to show you one of my Christmas cacti - I have two large plants and a number of smaller ones and most of them are flowering. Amazing that they always seem to know what time of year it is! 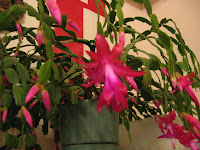 Hi Nicola, first of all thanks for all the comments you have been leaving on both of my blogs over the past few months, before doing this I didn't know anyone who lived in Canada. Your Christmas decorations are really nice, I have never tried drying out oranges, just one of the many things on my must do list. My mum used to make a really light fruit cake, we used to call it farmhouse cake, we all used to really enjoy those, I shall have a good look at your recipe, I guess non-cranks can still eat this! Your cacti looks really healthy, you are definitely looking after that right. Anyway must get ready now, I am on my works meal tonight, would rather stay indoors in the warm, it is brass monkeys out there. Wishing you and your family a great Christmas, and if the other three friends and a blog are looking in, I wish you a great Christmas too, and a Happy New Year to you all. Louise x

Thanks Louise. Certainly you don't have to be a vegan crank like me to eat the fruit cake - sometimes it's nice to have recipes like this available just in case you're expecting guests with different diet requirements. I have a really good gingerbread cookie recipe too, which I'm going to post soon, but I don't have photos. Samantha said she's going to be making cookies this weekend and will provide a picture!