Yes, I have bad karma. Awhile ago I wrote a post about this squirrel stealing my apples that I had worked hard to grow organically. I made some disparaging remarks about him, and, here's the worst bit, I (jokingly) said that I would sic my kitty on him. (I was joking Universe! Really! Anyone who knows me knows that I would never actually do that. I won't even go into the story of me, when I was a child, saving the rooster with the frozen leg from the chopping block - ever after affectionately known as Gimpy - you can just take my word that I would never wish to purposefully harm an animal) I actually ended up just picking all the apples off that tree so that Squirrel would not be tempted and we could each go on enjoying "our" yard. 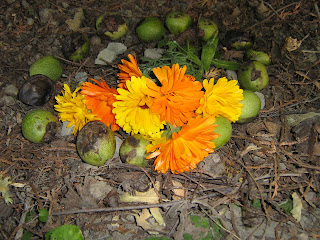 So you can Imagine how upsetting it was to walk into my garage and find part of Squirrel's little body on the floor, obviously done in by none other than....Kitty. Poor little thing. Oh the boys were upset. E especially. He decided to bury Squirrel and so he was buried with his nuts (!?) and the tears of a seven year old, under his favourite Hazelnut tree. E decorated his grave, with flowers and rocks, the next morning and seems to be feeling a little better after a few "circle of life" talks. We could hear a few other squirrels squawking throughout the day so we are pretending to ourselves that it was a "stranger squirrel from the mountain" that Kitty got instead of "ours". I know, I know, but strangely this makes us feel better. But you can bet that I am suffering from some serious bad karma thoughts towards myself and I didn't dare tell the boys what I wrote about the squirrel on here. They are total believers of "the secret" and this momma would not be very popular if they felt that I had put the Kitty get the Squirrel thought out there. 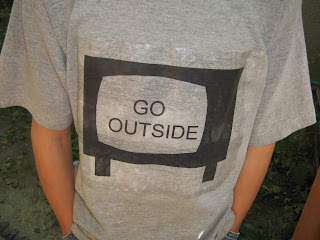 On a brighter note, W has decided that he wants to make t-shirts this year, with messages that he thinks are funny or inspiring. He got some shirts from the thrift store on our last visit, and this is the first one that he made. He is pretty anti-T.V anyway, but he read an article in Owl magazine about the amount of time that most people spend in front of the T.V. He added up the hours that most kids are in school, sleeping hours, T.V. hours and threw in an hour for eating and realized that...WOW!...kids have no play time. So, he likes his shirt.
Posted by Heather at 07:10

I love his t-shirt. Is he going to sell them?

Great t-shirt, W! Hope to be seeing more of your ideas.

W is one smart kiddo! The sooner he realizes that TV is the biggest time waster out there, the better off and more accomplished he'll be. Good for him!

Oh poor Squirrel! It's all your fault! ;) I'm sorry- I hope you will some day heal.

SWEET shirt! My daughter would love that.

One of the reasons I chose to homeschool my kids was so that they would have time to play. My 16 year old will still go outside and play like a wee heathen. He should sell those shirts! I'd buy them!

I'm not sure if he will sell them, right now he is having fun thinking of different iron-ons for his own shirts. I think he is planning on making them for gifts for friends and family for starters. We generally don't buy anything new, that we could buy used, so he will only make them on thrifted tees. We almost never buy new clothes, I'm not willing to do the amount of researching I would need to do to find earth and people friendly clothing companies. (Plus we have way more exciting things we would rather spend $$ on than new clothes.) Although if he does decide to start selling I guess he could always use MEC organic cotton shirts if the people he made them for felt they must have new. He does like to make money so he could probably be easily convinced. :-)

Cass,me too! That is one of the things that I love about my kids not going to school, they have so much time to just play and use their creativity to come up with all kinds of things. My guys always wonder where are the kids in our neighbourhood? Why are they never outside? I think it is pretty sad really, especially when I think back to my childhood and all the packs of kids just out playing together all the time.

Heidi, I think he is one smart kiddo too. :-) Last time we were at my folks (the only place he watches TV and it is only a few times a year) he just couldn't believe how few worthwhile shows there were.(especially considering the amount of channels they have) He was appalled by the commercials too. I think of it like that frog in the hot water thing, and when you haven't watched much TV and then you are immersed in it you quickly realize how stupid most of it is and have little tolerance for it - like the frog jumping out of the boiling water. If you are more like the frog who has slowly had the water temp turned up - you grew up watching TV and slowly got used to the crap - you just stay there in the water - watching the TV. Not sure if that makes sense to anyone else but it does to my brain. :-)